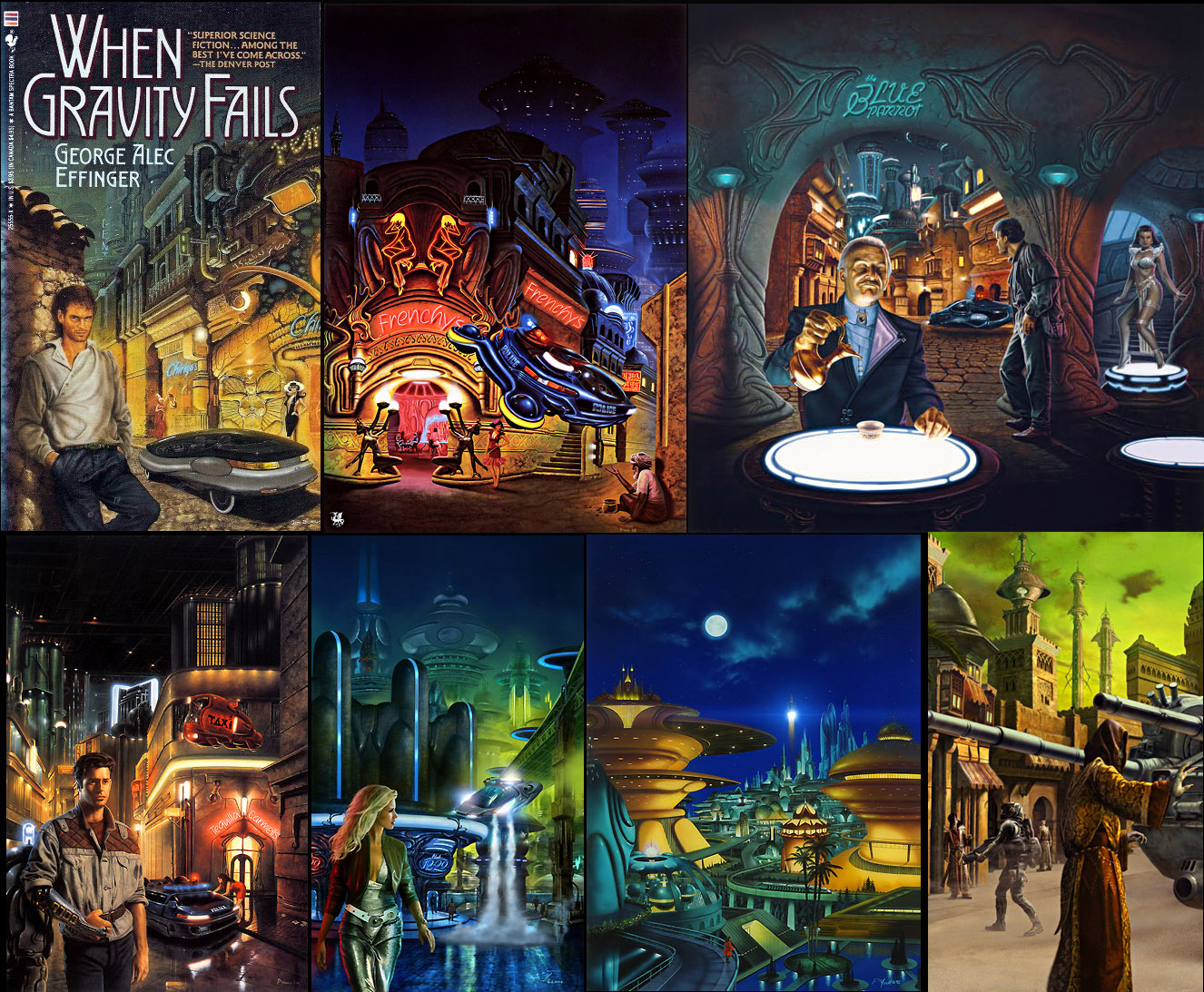 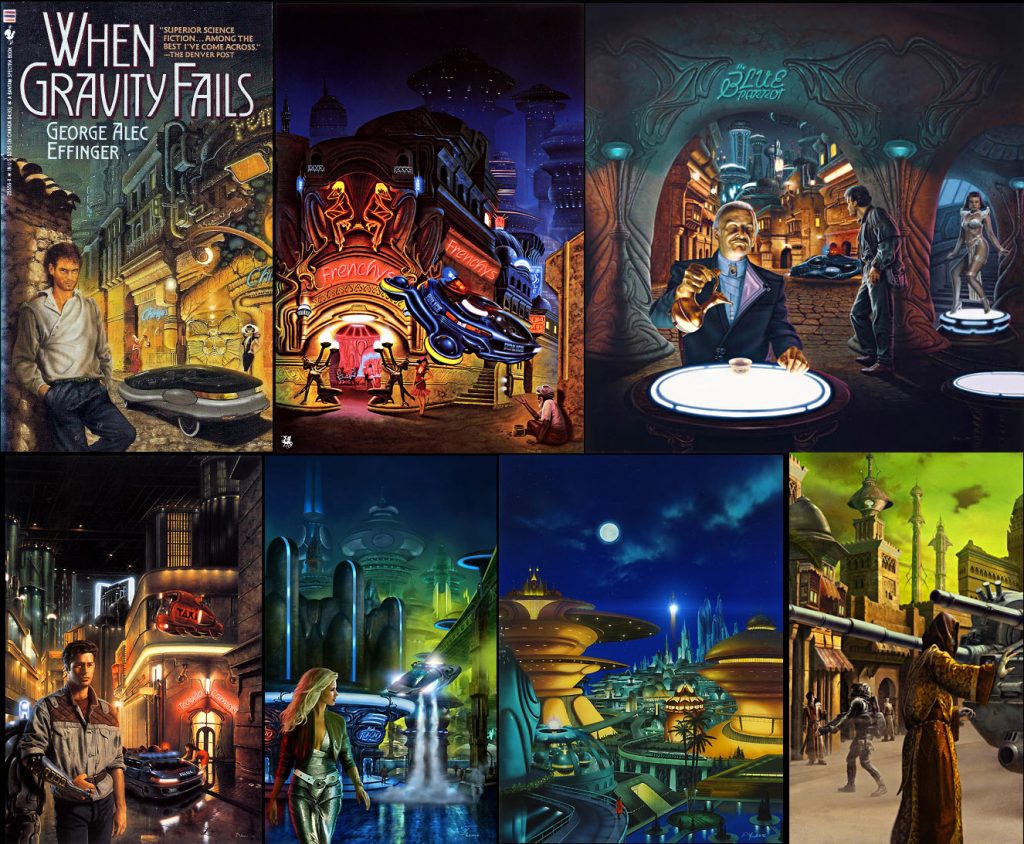 George Alec Effinger’s cyberpunk novel, When Gravity Fails, allows his readers to explore an innovative and intriguing futuristic world, one dominated by brain modifications, sex changes, and a string of gruesome murders. Our novel’s hero, Marîd Audran, is one of few working in the Budayeen who has managed to maintain his independence. This zone, infamous for crime, is packed with prostitution, drugs, alcohol, and cheap entertainment. When Audran stumbles into a series of seemingly-related murders, he is offered an opportunity to work with the Budayeen’s most notorious criminal mastermind, Friedlander Bey. Audran must strategically maneuver between the demands of Friedlander Bey and his own values and independence while staying alive and stopping the depraved killer.

I found Effinger’s imagining of the future quite telling of the political landscape during which he wrote. Written in 1986, the novel takes place in the 22nd century Middle East after a splintering of the Soviet Union and the United States, leaving much of the Western World fragmented into small states. In this vacuum of power, the Middle East has returned as the prosperous center of tourism and development. Although taking place in a fictionalized city, Effinger hints that the area is somewhere in the Levant, possibly in modern-day Lebanon or Israel. His visualization of the Cold War taking down not just one super power, both both, and leaving much of the Western World divided seems an apt prediction for his time.

Audran lives in a world of modifications; nearly everyone in the Budayeen has some sort of physical or mental enhancement. The physical ones are not so different from what we see today: breast enhancements, facial reconstruction, fat reduction. Whatever plastic surgery a person wants can be done at a price. Audran seems bored by the dozens of perfectly sculpted bodies dancing day-in and day-out at the bars.

Sex changes are commonplace. From what we can gather from Audran’s narration, gender appears quite fluid. Most of the dancers in the bars and the prostitutes were born male, including his girlfriend Yasmin. While some have completed the shift from one sex to the other, others are somewhere between male and female, preferring a more ambiguous gender. While Marid Aubran states he usually can tell to which sex a person was born, he is mistaken multiple times throughout the novel. Effinger’s commentary on sexual fluidity very much seems ahead of his time, making the novel still relevant in terms of the current social dialogue regarding sex and gender.

Just as common as plastic surgery and sex changes are brain modifications or “moddys.” Surgeons are able to rewire one’s brain in such a way that the person can install software that can change their entire personality. By popping in a “moddy,” you can become anyone: living or dead, fictional character or superhero. Their pre-programmed knowledge, personality, language, and thoughts become yours. There are less overwhelming additions, “daddies,” that can be installed as well. Instead of an entirely new personality, these allow the wearer to gain new knowledge or abilities, such as the ability to speak a new language, analyze data, or override hunger. Almost everyone gets wired as soon as they can afford it. One character says he was wired at the age of 13. The only ones who shy away from such modifications are the devoutly religious. And Marid Audran. Audran prefers his brain as it is.

One of the highlights of the book is the way Effinger truthfully incorporates aspects of Middle Eastern culture into his writing. He manages to portray the city as one of diversity, not as a flat, uniform culture often depicted in films. Aubran, for example, is from Northern Africa, the son of a Maghrebi prostitute and a French father. While he considers himself Muslim, he is not devout. He hints at the mixed roots of other Arab characters, and has been acquainted with a number of foreigners of American, Russian, European, Africa, and East Asian backgrounds. Ethnic diversity is prevalent. Likewise, he emphasizes the religious diversity of the city. While some are extremely devout Muslims, others are non-practicing Muslims, Christian, or simply non-religious. The city is divided into rich and poor areas, religious and non-religious, areas dominated by crime and upscale spaces. This diversity paints a much more accurate and believable picture of the Middle East than I originally anticipated it would.

Likewise, the author frequently laces his novel with Arabic expressions, greetings, and customs. Part of the novel takes place during the holy moth of Ramadan, Audran often quotes from the Qur’an, and characters haggle over prices in much of the same style as I’ve experienced across the region. Effinger even presents the moral and religious ambiguity surrounding the prevalent culture of mental and physical modifications, the religious community shunning the “moddies” altogether.

Overall, I thoroughly enjoyed the novel. I found the characters likeable, despite their sometimes moral ambiguity, and the plot stimulating while simultaneously easy-to-follow. The humor is dry and dark, my favorite, and the reader will be left with questions regarding our own consciousness and what is means to be independent.