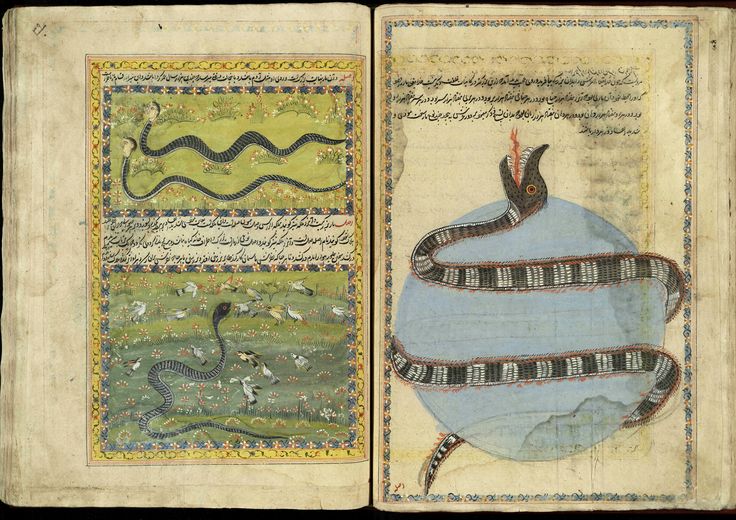 I had the fortune of going to the Getty Center in LA a couple of weeks ago and was delighted to discover that the complete copy of Abu Yahya Zakariya ibn Muhammad al-Qazwini (أبو یحیی زکریاء بن محمد القزویني) book of wonders is available online via the Getty Center. His work is considered to  be proto Science Fiction. Here is a fascinating excerpt about the book Marvels of creatures and Strange Things Existing from Wikipedia:

After God created the angels and the jinn that fly from one climate to another, He created the birds because He knew that many people would deny the existence of flying creatures, especially the angels. Furthermore, Qazwini adds as proofs that God created birds with three wings, as He did the unicorn, the Indian ass with a horn or the bat without wings; why not angels? Among the birds Qazwini classifies the Anqa or Simurgh (Phoenix) as the most known bird and the kin of birds that lived alone on Mount Qaf. This idea goes as back as to the time of Zoroaster. In more recent traditions the Anqa is a wise bird with experience gained throughout many ages and gives admonitions and moral advice.

Long before Adam was created, this bird lived without procreation; he was single and the first and most powerful bird. The “golden age” of the Simurgh was the time of Solomon in which not only ministers were near his throne but also animals and birds with whom Solomon could speak; the Anqa also talked to him and was the most respected. The second bird that is also recurring in classical Persian literature and mentioned by Qazwini is the Homa (paradise bird). When it lands on someone’s head, that person becomes the king of his land. Being also a bird used in Iranian mystical symbolism is the salamander or “fire bird”, which was not seen since the time of Muhammad. Qazwini talks about the hoopoe (hudhud) that has a central role in Iranian mysticism too, only in passing; here it is described as being able to see water from afar but not the mesh that in front of its eyes.

So the hoopoe symbolizes fate: when it comes, the eyes of man are blinded, i.e. man is not able to predict his fate. Another exceptional bird in Qazwini’s list is the eagle because lions feared it and from his wings fire appears. Birds that were conceived as strange hybrids by Qazwini are the vulture, having the claws of the rooster, or the ostrich with the feet of a camel and the body of a bird; this bird eats stones and flames and can live in fire for ten years. He is also able to digest legs of a horse and birds but not date pits. The ostrich fears his own shadow and always walks against the sun. There are also other rare and strange birds, for example a big bird in Khuzistan that attacks camels and elephants and has eggs similar to crystal; the “purple bird”, a white bird that sits on a rock in the Chinese Sea and the person that looks at that rock must laugh to death, except that this bird lands on the rock; or a bird in Tabaristan which is seen in spring and carries one hundred sparrows on its tail and eats one each day.

2016-04-20
Previous Post: Islam and Sci-Fi interview of Ken Kalfus
Next Post: Dissertation on the Novels of Kassem Kassem