The Fiqh of Marrying Mermaids by Zainab bint Younus 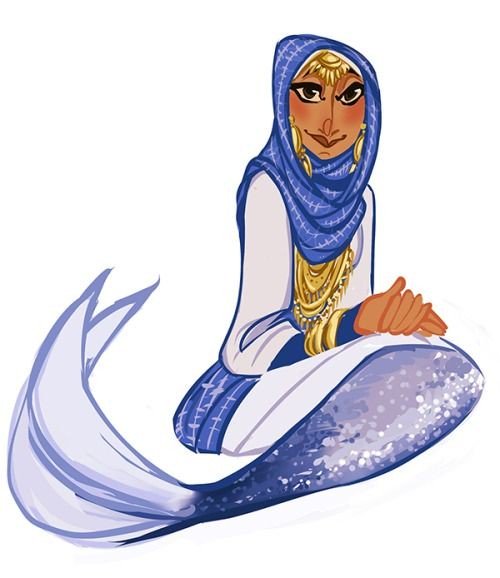 The Fiqh of Marrying Mermaids (or: A Tale of the Hoori of the Sea)

On a small boat in the ocean, a lone man stood in prayer, bearded and regal even in the depths of the night. His voice fell and rose with the cadence of Divine Words, echoing across the sea. “Wa hoorin ‘ayn, ka amthaalin lu’lu’…” he faltered for a moment, trying to recall the description of the heavenly handmaidens.

His gaze fell upon a pair of eyes, startlingly bright in the darkness – amber, with the same reflective quality of a cat.
It was certainly no cat that stared back at him, however. Two very human (though slightly phosphorescent) arms nestled on the rails of the boat’s deck, hoisting a very human torso and – he yelped and jumped back – a very inhuman tail from the waist down, featuring darkly glimmering scales of blue-black and ending in translucent fins that draped daintily over the deck.

For a wild moment, all he could think was, “She has no seashell bra!” – for yes, the creature had a distinctly feminine face, framed by what appeared to be a swathe of silky seaweed that draped over her shoulders and body. Then he blushed, because he shouldn’t have been thinking of seashell bras (AstaghfirAllah! He repented hastily), and then he choked back another yelp and coughed out, “Who are you? What are you?”

The creature tsked disapprovingly. “You broke your salah. Not supposed to do that.” Her eyes gleamed with mischief. “I am a Hoor.”

He definitely needed to sit down for this. “A… Hoor…” he echoed faintly. She laughed, a sound that evoked high tide rushing in, and treacherous whirlpools that tugged you into the current, and promises of buried treasure.

“I am of the Hooriyat al-Bahr,” she said, still laughing at him. “Not quite the ones described in the Divine Verses, but,” she preened, the powerful muscle of her tail flexing, “not too far off, either.”

He caught himself looking at her again, and quickly lowered his gaze.
“You know the Qur’an?” He asked dazedly.

“Better than you,” she sniped back. “I am haafidhah, after all.” She tossed her head, and he caught glimpses of tarnished coin and polished seashells in the netting that covered her hair.
“So you’re… Muslim… then?”

She looked at him disdainfully. “Of course I’m Muslim,” she snapped. “The Mer, as the Faranji call us, have always been believers in the One True God – or at least, most of us are. Do you not know that Prophet Sulayman spoke the languages of all creatures? If he could speak to the ants, it is only obvious that he would speak to the Mer.”

“But how do you -” he gestured to her tail, which she deliberately slapped into the water, splashing him. “How do you pray?”

“You humans really are stupid,” she remarked. “Do you think that the Ghayb operates according to your rules? ‘Wa maa khalaqtal jinna wa’l insa illa liya’budoon.’ Do you think our Lord created us to worship Him only to leave us ignorant of how to do so?”
She snorted derisively. “Next you’ll be asking if we have to do wudhu,” she said mockingly, and he flushed in embarassment because he *was* about to ask that very question.
He knew it was a bad idea even before he blurted out the next question. “Are you halal to eat?”

“And this,” the Hoori said loudly to the dark water surrounding them, “is why my ancestresses drowned sailors so regularly. Every time these human men open their mouths, their stupidity merely increases.”

He sighed, suddenly weary. “Why are you here?” He asked her. “What do you want from me?”

Her gaze sharpened, turned hungry. “Finally,” she said with satisfaction. “An intelligent question.” She leaned forward, and her voice filled with longing. “I want – I *need* – to be a part of your world. There is so much that I need to know, so much that I need to learn, and the knowledge I seek is only on land. I cannot become the scholar I wish to be trapped within the ocean.”

“What am I supposed to do about that?” he demanded.
She fixed him with a stare. “Marry me.”
He spluttered. “What – why – why me?”
She looked insulted. “Why not?”
“I mean… why do you have to get married to do whatever it is you want to do?”

She made a noise of disgust. “Patriarchy. Fiqh of the sea. Can’t transform unless one is married to a human man. Need a mahram to travel on land.” She waved a hand dismissively. “So. Will you do it?”

He looked at her for a long while. “What is your mahr?” he asked finally.
“Freedom,” she said promptly. “And in return, you’ll be married to a mermaid.”
“We need a wali, and witnesses.”
“So that’s a yes?”
“Wait, aren’t I supposed to propose to you?”
She raised an eyebrow at him. “Ever heard of Umm al-Mu’mineen Khadijah?”
He looked sheepish. “Well… yes, then.”
Her voice deepened in sudden seriousness. “This is a binding oath, across land and sea, of marriage, of freedom, of knowledge. Do you accept this vow as your own?”
He surprised himself by answering gravely. “I do.”
A smile flickered over her face, a true smile, devoid of sarcasm, and he found himself smiling back, his heart inexplicably light.
“So are we getting that wali, or what?” he asked, and she grinned.
“Stay put,” she said, uncoiling her tail from its hold on the rails. “And don’t marry any other mermaids while I’m gone.”
“I’ll try,” he said drily.

With a smooth twist of her body, the Hoori launched herself back into the ocean, the obsidian scales of her tail gleaming in the moonlight.
It was only after she disappeared completely beneath the waves, leaving behind only swiftly fading ripples, that he realized that he did not know his Hoori’s name.