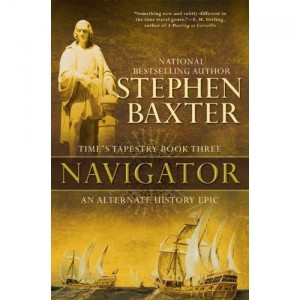 Here is the book description from Amazon.

As William the Conqueror’s men attempt to stamp out the flames of rebellion, a prophecy is uttered. A bedraggled woman in a ruined chapel speaks of civilizations in conflict, armed by the engines of God…

And that prophecy proves to be true as the fearsome war between Christianity and Islam leaves its mark across the land. In Spain, a rogue priest dreams of the final defeat of Islam, for he has found a rent in the tapestry of time, a point where agents from the future used diabolical weapons of destruction to change history. Centuries later, in 1492, as men of vision weary of the strife and are drawn to the unknown West, one such explorer seeks the funding for his voyage- while a mysterious Weaver plots to unravel the strands of time and stop him.

Thanks to Ahmed N. for the pointer.