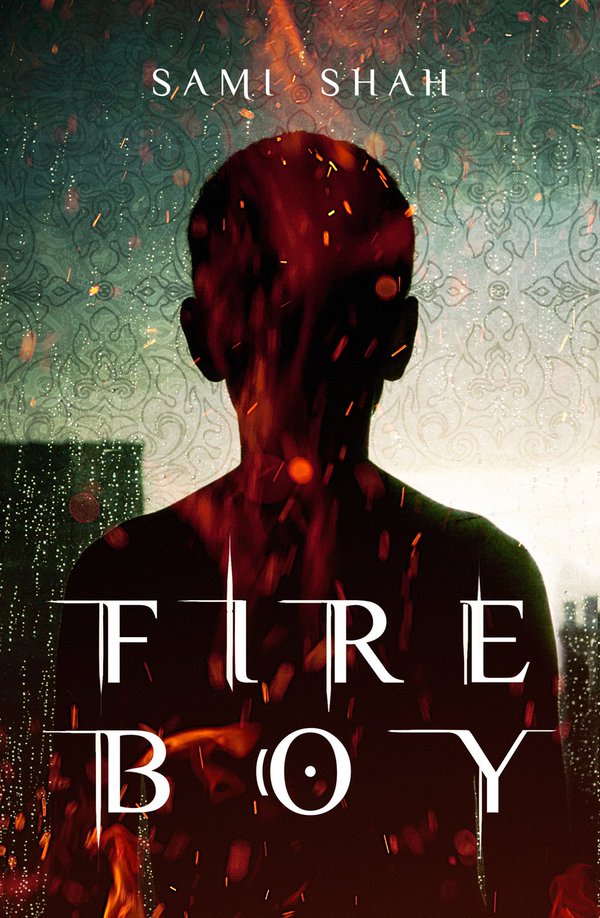 Fire Boy is the first book of a duology by Sami Shah. Shah is a comedian, broadcaster, writer, speaker, and newshound. He has the breadth of perspective you’d expect from someone with so many strings to his bow.

The story shows how a baby of extraordinary origins becomes a rather ordinary young man, Wahid. It then smashes his life apart by way of a car crash. It’s a compelling examination of survivor guilt and the bridge to adulthood. But it’s also a supernatural tale that is stuffed with terrifying djinns and explores Sufi mysticism. When the djinn causes the wreck, it steals the soul of Wahid’s ‘love object’ leaving her in a vegetative state. Wahid vows to find the djinn and make her whole again.

The book is one of those very gratifying reads that is easy on the eye while also working on several different levels. It’s also has a literary feel – every page is filled with gorgeous prose. Shah makes the quotidian touching without detracting from his trademark comic timing. He also makes the unbelievable credible through vivid and sometimes blood-curdling scenes.

Fire Boy is set in modern-day Pakistan, and delivers a delightful range of locations, geographical and cultural: rural communities, beach houses, the urban middle class, young people out clubbing, spiritual communities, and the poorest of the poor. Repeatedly we see normal life crunched to dust by malign creatures – supernatural and human. He captures the stomach-sinking paralysis of truly awful events in a way that remains fresh for the entire book, bringing us back to intimate human connection at just the right moment to throw the next horror into vivid relief.

As it progresses, the story takes us into increasingly unsettling territory in the real world. We go from what is, essentially, a middle class, suburban existence, to touching the lives of street children and battered women. Starting from a recognisable family and community Wahid ventures out into the wider world, forging deeper into Sufi mysticism to a place of suspended moral platitudes, ambiguity, and finally beyond the known world. It promises a very interesting sequel.

Unfortunately, most of the book felt like it was a prelude to the main story. Of course, being the first half of a two-book take, it is. But it didn’t quite focus enough on story in the first volume. But for all that it belts along. A series of unpredictable twists and compelling scenes keep you turning the pages. I kept scurrying off to the bathroom with my Kindle, and actually fed my kids the ‘Mummy has a headache’ lie, in order to indulge the bliss of lying down with a good book in the middle of the day!

The central plot is interspersed with urban legends and old folk tales that interrupted the narrative, dripping into the sub-plot, but still difficult to connect to the main events. It’s an ambitious structure, but these interludes are so well written that you don’t really mind being a bit disappointed that the clunky plotting never quite makes good on the promise of the excellent prose.

While I felt that he could have studied the craft of novel writing a little more deeply, Sami Shah’s raw talent sneaks light into murky philosophical corners, asking complicated questions and challenging stereotypes. His skill is in achieving this casually and without any hectoring. One of the things I really enjoyed was the way that Shah never panders to the ignorance of non-Muslim readers.

I have no idea whether this is true or not, but I can’t help feeling that the first draft of this book was written by a much younger man… a man who understands the importance of equality for women but isn’t yet fully conscious of his own implicit bias. The female characters are a terrifying mix of sexy old hags or perfect victim caricatures. My hope is that Wahid’s journey takes him to this realisation in volume 2. I can’t wait to hear what his would-be girlfriend has to say when she wakes up.

Sami Shah is enviably productive, and unquestionably talented. Fire Boy is his first work of fiction and I want many people to read it because it’s a good book. But, what my fingers are really itching to get hold of are his 3rd, 4th, and 5th novels.