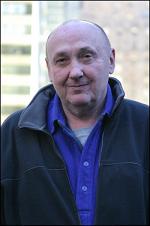 Background: In the current interview we are going to break with tradition somewhat and interview a Fantasy author. Irving Karchmar is an American Muslim convert and is also a darvish of the Nimatullahi Sufi. He is also the author of Master of the Jinn: A Sufi Novel. The novel revolves around the discovery of a ring by archaeologists which may be the ring of Soloman from which he commanded the loyalty of Jinns. Unable to solve the mystery through Science the archaeologists seek the help of a sufi master and they set off on a fantastic journey in the Sahara to solve the mysteries of the ring. The novel has garnered widespread acclaim and has been translated into at least 8 languages.

Aurangzeb: What attracted you to writing fiction in the first place?
Irving: I was not attracted to writing fiction, having written only poetry and articles before getting the idea for Master of the Jinn. The beginning and the end came to me fully formed during zekr, the Sufi meditation, and over the years as I filled in the middle story, I came to the inescapable conclusion that the book was writing me.

Aurangzeb: What are the main themes that inform your work, Master of the Jinn?
Irving: Master of the Jinn is really a Sufi novel, and so the main theme is the Sufi path of Love. The story and characters, by expressing through their words and deeds the courtesy, manners, and loving-kindness of the Path, drive the narrative.  Of course, since it also involves the Jinn, those legendary creatures of living fire that have been a part of Arabian myth since pre-Islamic times, there is a fantasy component to it.

Aurangzeb: Are you currently writing or planning to write more novels?
Irving: I am currently working on the sequel to Master of the Jinn, entitled Tale of the Jinn, which will continue the story of the main characters and also present the unknown cosmology of the Jinn race.  I am also working on two non-fiction books which I cannot discuss yet.

Aurangzeb: Any possible foray into Science Fiction by Irving Karchmar?
Irving: Possibly, as I have been considering a First Contact type of novel and may write it eventually.

Aurangzeb: Do you have any favorite Science Fiction author or a favorite novel that you would like to share?
Irving: Indeed!  My favorite Science Fiction author is Frank Herbert, the brilliant creator of the Dune series of books. He really is a first rate writer, as well as having a unique and fertile scientific mind for both science and fiction.  And of course, J.R.R. Tolkien is unsurpassable in fantasy literature, and its Sword and Sorcery sub-category.  Between those two, I am particularly fond of Robert Heinlein and his Lazarus Long books, as well as Stranger in a Strange Land. They are books that I reread every few years, which is the mark of a favorite.

Aurangzeb: Do you think the current political climate effected portrayal of Muslims in fiction?
Irving: Of course! How could it not?  Even before 9/11, the only portrayals of Muslims in books and films were mostly of the Palestinian terrorist type, or Arabic or Iranian men who married Western women and ran off with their children to Muslim countries. Until there are positive portrayals of Muslim heroes in fiction, both novels and films, there will only be the Western notion of Muslims as either terrorists or abused hijabis.  And it is up to the Muslim author to write the novels and stories that portray Muslims and Islamic culture in a positive light, without the bigoted nonsense of Holocaust denial, or Jewish and Christian Crusader conspiracy theories.

Aurangzeb: What advice do you have for young and burgeoning Muslim authors who may be interested in writing Fantasy or Science Fiction?
Irving: My only advice is to write what you know, and for Muslim authors it would be to write from an Islamic viewpoint, and to not try and emulate Western thinking and writing styles.  The Muslim voice is unique in the world, and so should it be written. Science Fiction has few interesting Muslim characters, besides the Fremen of Dune.  That is unfortunate, but testifies to the fact that Muslims consider fiction, whether Science Fiction of fantasy, as a form of lying, and so have no history of writing fiction. That has always struck me as ridiculous considering the vast history of Islamic storytellers, from the Arabian Nights to the Sufi teaching tales. Inshallah, it is slowly changing, thanks in part to such organizations as the Islamic Writers Alliance.  I would recommend any Muslim author to join it and not be discouraged by the lack of Muslim publishing companies or Muslim literary agencies. Those too will come in time.  And I would add that Master of the Jinn has been translated and published in many languages, all through my own efforts in online marketing and networking, and you can do it too.  Never despair, and trust in Allah, and the way will be made clear in His good time.