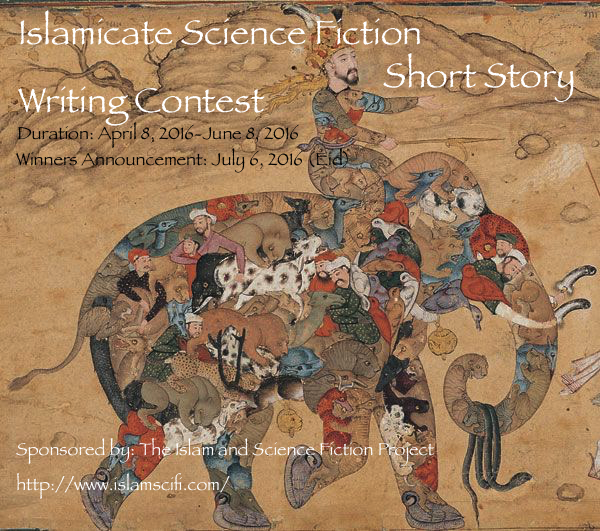 The Islam and Science Fiction project has been running since 2005, we just entered our second decade. While the depiction of Muslims in Science Fiction and Islamic cultures has improved we still have a lot way to go, as is the case with many other minority groups. To kickstart things in this genre we have decided to start a contest centered around Science Fiction with Muslim characters or Islamic cultures (Islam in the cultural sense and not necessarily in the religious sense). We are pleased to announce the Islamicate Science Fiction short story writing contest. The contest is open from today (April 8, 2016) to the beginning of Ramadan/Ramzan/Ramjan (June 8, 2016). The winner will be announced on the day of Eid – July 6, 2016. If you already have a story then be sure to submit it soon, if not then start typing.

Islamicate refers to the cultural output of predominantly Islamic culture or polity. Thus while the culture has its foundation and inspiration from the religion of Islam, it need not be produced by someone who is Muslim. The term Islamicate is thus similar to the term West as it encompasses a whole range of cultures, ethnicities and schools of thought with shared historical experience. The contest is open to all people regardless of their religious affiliation or lack there of. Thus a person of any religion, nationality, ethnicity race, gender, sexual orientation can submit. A collection of the best stories from the submissions will be released as an epub and available to download for free. Only the top three stories that win the prize will be given the prize money, the others will be published without the money.

We already have the following pool of prize money:

Our goal is to extend it to:

How to submit: Please submit your short story to islam.scifi@gmail.com with the subject line Short Story Contest

If you have questions about the contest then you can either leave your questions as comments to this thread or email me at mahmad@cs.umn.edu Be sure to spread and the word far and wide, we are looking forward to your submissions!

2016-04-08
Previous Post: Book Launch: Haris A. Durrani presents Technologies of the Self with Sahar Ullah
Next Post: Allah’s Automata: Artifacts of the Arab Islamic Renaissance (800–1200)