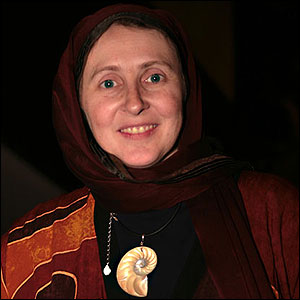 Background: This is the second interview in the series of interviews with Muslim authors. This week we will be interviewing Pamela K. Taylor. Pamela Taylor is a Muslim American poet and a writer. She has published a number of Science short stories in various collections like A Mosque Amongst the Stars, Citizen Culture Magazine etc. She has worked as a journalist, and has published fiction, poetry, reviews, and op-ed pieces in the Muslim and mainstream presses. She has also edited and contributed to a number of genres. She is also part of the Islamic Writers Alliance. Her official website is at the following URL: http://www.pktaylor.com/

M. Aurangzeb: Being of Muslim and a convert, how much does you background inform your work?
Pamela Taylor: My Muslim identity runs all through my work. Both in obvious and less obvious ways. A lot of my pieces have Muslim characters, or take place in Muslim cultures. Those that don’t are still informed by my attitudes and values and experiences as a Muslim. One theme that reappears over and over again (unbidden I might add) is that of engagement with the Other. Obviously, as a convert, I have not only engaged with the Other, but gone native so to speak. Other themes that frequently surface are legalism, theocracy, and extremism; obviously the global Muslim community is dealing with all of these under profoundly challenging circumstances. As far as values go, one of the reasons I was able to convert is that a lot of Islam’s values tallied with my own. Commitment to justice, equality, compassion for others, humility, and also individualism. These values are reflected in my work, at least in the best of it.

M. Aurangzeb: What kind of themes inform your work? Any representative stories that you would like to share?
Pamela Taylor: See above! I have a couple short stories that exemplify what I said about direct and indirect influence. One is Recompense, which appears in A Mosque Among the Stars. It was inspired by a verse in the Qur’an, which is actually quoted in the story itself — do not say those who died in the way of Allah are dead! Nay but they are alive with God. I spring-boarded off that verse into a slave pirate ghost story that I describe as Amistad meets Pirates of the Caribbean. So that piece directly relates to my Muslim identity, there are Muslim characters, and it is a speculative take on a verse in the Muslim holy book. Another story I wrote — The Writing on the Window — which was published in an anthology called Tales of the Slug, is a tongue in cheek civil rights story about slugs. There are no Muslim characters, and at first read it would seem to have nothing to do with Islam, but the theme is very much in keeping with my feelings as a Muslim regarding “the Other” (in this case slugs), prejudice, injustice, and equality. Of course, those themes are ones that could be seen as American as well, or just my personal value system. I think all three are intertwined and interconnected.

M. Aurangzeb: Why attracted you to Science Fiction in the first place?
Pamela Taylor: I have always enjoyed Science Fiction. I think in part that is due to the fact that I was a very young child when we first landed on the moon. One of my very early memories involves watching the moon landing on television. I was four years old, and it really fascinated me.  The first sci-fi book I remember reading was Journey to the Wonderful Mushroom Planet (that may not be the exact title). It is a children book, with several sequels and it just captured that sense of wonder and adventure that the moon landing created. As I have matured, I’ve found that science fiction is an excellent venue for talking about ideas, for exploring not just science, but sociology, the human condition, etc. I find many of the books I read these days are extremely thought-provoking. And as a writer, some of what I have to say, some of the discussions I’d like to provoke may not be well received in direct form. Writing science fiction allows me to address some of those issues in a safe way, a bit less directly, in allegory. I wrote about slugs, but the same story could be told about any marginalized group.

M. Aurangzeb: Do you think there is a general lack of interest in Science Fiction in the Muslim community?
Pamela Taylor: Well, there are two sides to that question. In the global Muslim community, I think fiction in general is a hard sell. A lot of Muslim cultures have no tradition of fiction; it’s a relatively new form. Also, the segment of our society that is religious, and that is appears to be a fairly large segment, has a suspicion of fiction — they see fiction as stories for children or lies or worse as a license for immorality. Obviously, there are plenty of Muslims around the world who do not view fiction that way. And certainly in the American Muslim community reading for pleasure has been embraced by the younger generation whose social outlets are often tightly controlled by parents. That group seems to be very interested and eager for science fiction and fantasy.

M. Aurangzeb: Are Muslims and Arabs type-casted in Science Fiction stories in general?
Pamela Taylor: Heck ya. In mainstream Science Fiction there are all too many novels where Muslim characters are just perpetrations of stereotypes about Muslims — backward, dirty, violent, extreme, ascetic and/or hedonistic (how you get those two together has always been a bit mind-boggling to me).  A lot of the distopian literature today seems to feature Muslim — or Muslim inspired — theocracy, or a global catastrophe set off by terrorists. Even when Muslims are only incidental characters, they are often portrayed as extreme or very zealous, or explosively angry. Obviously, there are notable exceptions to that rule, but I do think Muslims make for a convenient stereotypical bad guy.

M. Aurangzeb: Has the current political climate effected portrayal of Muslims in Science Fiction?
Pamela Taylor: I think so. After 9-11 I have seen quite a few more books with Muslim cultures gone bad.

M. Aurangzeb: What is your favorite Science Fiction author?
Pamela Taylor: Oh wow, hard to pick just one! Some of the authors I really enjoy include the standard – Herbert, Brin, Card, Le Guin, Banks, Cherryh, Pournelle.  Louise Marley has a masterful work called the Terrorists of Irustan which is a must read as far as I’m concerned, and I have enjoyed a lot of her other work as well.

M. Aurangzeb: Do you have any advice for the young and upcomng Muslim Science Fiction authors?
Pamela Taylor: 1) Read, read, read. That’s the best way to see what works and what doesn’t work.
2) Go to conventions. It’s a great way to meet fans, editors, and other writers.
3) Consider a writing workshop at one of those conventions you attend, or even better find a local writing group to meet with on a regular basis. You can get great feedback on your work and get some great pointers.