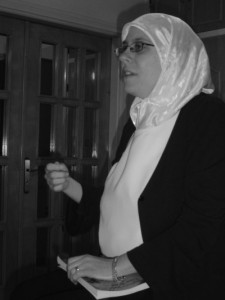 Background: Najiyah Diana Helwani is an American and is currently based in Syrian. She is the author of Sophia’s Journal: Time Warp 1857 – a time travel coming of age novel set in Kansas right before the Civil War. She has published a number of articles and pieces of poetry. Najiyah currently teaches English and writing in Damascus, Syria. When in the US she conducts workshops on Islam and the history of United States’ relations with the Middle East.

Aurangzeb: Your novel Sophia’s Journal: Time Warp 1857 is about Time Travel, can you tell us more about your work?
Najiyah: So far Sophia’s Journal is my only novel.  I have been blessed to have three short stories published – two at http://damazine.com and one in the anthology Many Voices, One Faith II. Link

Aurangzeb: What inspired you to write the novel?
Najiyah: I was teaching high school history at an Islamic school, and when we began to discuss studying slavery the kids were rather apathetic.  These were kids who knew a lot about current oppression, like the illegal occupation of Palestine, the struggles of the Kurds, Kashmiris and Chechens, but for some reason the oppression of the slaves here in the US didn’t strike an emotional chord with them.  They didn’t empathize.

Well, I had always been fascinated with both frontier life and the concept of slavery – how could people possibly think they had the right to own another human being like that?  So I took a young girl with 21st century sensibilities and sent her there to find out.  I hope Sophia’s adventure resonates with American Muslims and serves as an interesting and gentle introduction to Islam for non-Muslims.

Aurangzeb: What attracted you to Science Fiction in the first place?
Najiyah: Kurt Vonnegut!  Ray Bradbury! Anne McCaffrey!  My favorite way to start thinking about a story is, “What if…?” followed by some scenario of altered reality or perception.  Of course not all my what ifs make it to the page, but sometimes the little seed of a what if sprouts into the joy of a story.

Aurangzeb: What kind of themes inform your work?
Najiyah: I love to put characters into unusual circumstances and see how they respond and adapt, and it’s even better if the scenario has something to do with struggling against the evil one finds inside and outside oneself.  I am also fascinated with memory and identity.  For some reason those themes pop up a lot in my story ideas and writing.

Aurangzeb: Do you think there is a general lack of interest in Science Fiction in the Muslim community?
Najiyah: I think there’s a general lack of knowledge about what SciFi even IS!  And it’s so hard when we’re still battling some people who think fiction itself is haram or makruh.  In many parts of the Muslim world, reading for pleasure and insight is just not part of the culture, and among Western readers there is a prevailing suspicion that Islamic fiction is substandard.  So we have to raise awareness of the value of fiction itself and market well enough that readers begin to realize that we’re good writers as well as promote Islamic science fiction within the sci fi community.

Aurangzeb: Do you think that Muslims and Arabs type casted in Science Fiction stories in general?
Najiyah: It seems that in many cases the apocalyptic drama set as a battle between “Muslim Terrorists” and the sane world has replaced the exotic Eastern mystery of veiled women and sufis chanting in mosques.  What bothers me is when people write stories or movies that perpetuate historical and/or theological fallacies.  And when they represent the terrorists as mainstream Muslims.

Aurangzeb: What is your favorite Science Fiction author?
Najiyah: George Orwell and Douglas Adams.   And Kurt.  And Ray.  Do I have to choose?  I know I should be more up on current writers, especially Muslim ones!

Aurangzeb: Are you currently working on any novel or other piece of fiction?
Najiyah: Actually, I’m working on a non-fiction book that will contain first hand accounts of how families cope when one among them suffers from schizophrenia.  I also have written an outline for a novel that revolves around memory and self, but it’s set in Palestine and I can’t really sit down and write it until I visit there.  Which I’m hoping to do soon, insha’Allah.

Aurangzeb: Any advice to young and upcoming Muslim authors who might be interested in Science Fiction?
Najiyah: 1.  Make du’a every day.  Sincerely and in detail.  Make Allah your first writing partner.

2.  Read and read and read.  Use every book you read as research.  Try to notice and absorb literary techniques and devices, pay attention to a good writer’s sentence structure and sense of humor…all these things will help you in your own writing, but you have to read a lot and have passion for your reading and writing for them to osmosify into your brain.

2.  Network.  After du’a, networking is the single most effective and necessary tool in your arsenal – not just for marketing, but for writing support, camaraderie and commiserating as well.  Build relationships that can later blossom into collaborations and/or friendships.  Network with non-Muslims as well as Muslims, community activists as well as writers, young adult authors as well as sci fi authors.  Join online groups, writing critique groups (start one if there isn’t one), community improvement groups and knitting groups.  All the people you meet are potential readers, collaborators, advertisers and friends.