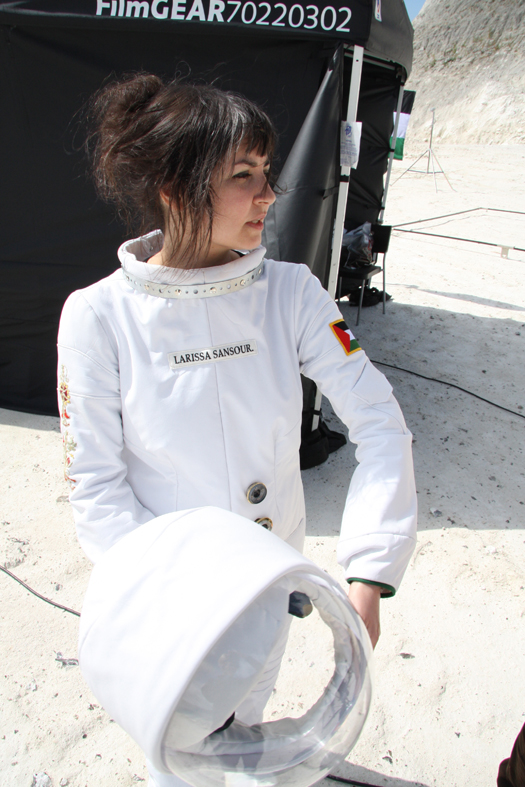 Bio: Larissa Sansour is a Palestinian artist. She was raised in Palestine but had to move when the events in the Middle East forced her to move first to Europe and then for higher studies in the US where she received MA in Art from NYU. Her work is interdisciplinary in nature and covers multiple mediums and is usually informed by current political themes. Her work spans utilities video art, photography, documentary, graphic arts, the book form and the internet.  Her work has been featured in a number of galleries, museums, film festivals and art publications worldwide. Many of her works are informed by science fiction themes. Her project Nation Estate gained world wide attention which presents a  dystopic vision of the Palestinian state which exists in the form of a single skyscraper and is surrounded by a concrete wall and houses the entire Palestinian population. Each Palestinian city has its own floor and intercity trips which were previously marred by checkpoints are now made by elevator.

Muhammad: What inspired you to become an artist?
Larissa: I always knew that I would become an artist. As a child, I drew and painted incessantly and was very good at it. Eventually I ended up studying at art schools in Europe and the US. My main focus back then was still on painting, but after graduating from university with a master’s in fine art, my practice took a considerable turn. Nowadays the medium that I choose is determined by the subject matter. My practice has become more interdisciplinary involving video, photography installation and the book form.

Muhammad: What are the main themes or influences that inform your work?

Larissa: Ever since the beginning of the second Palestinian Intifada in 2000, events in the Middle East have been the major source of inspiration for my work. For a Palestinian, politics is not just an option, but something fundamental and inescapable. The dichotomy of belonging to and being removed from the very same piece of land – be it physically, mentally, administratively, militarily or otherwise – is central to my work. Ordinary understandings of identity are often linked to the idea of belonging to some kind of geographical unit – a region, a land, a country. But for most Palestinians, the experience of being removed, exiled or cut off from the very same place they belong to and identify with is just as crucial for their self-understanding. In my work, the notion of belonging manifests itself in anything from architecture, ownership and geography to social relations, local produce and gastronomy. In contrast, tangible restrictions on mobility – walls, fences, checkpoints – maintain a permanent sense of being cut off, uprooted and kicked out.

Muhammad: How did you come to choose science fiction settings for your work?
Larissa: In general, the sci-fi realm is a fantastic conceptual and philosophical playground. In several pieces over the past years, I have been exploring not only the sci-fi genre, but also the comic book superhero. Both forms have an inherent ability to make accessible the most fundamental ambitions of a people or a civilization in a way that is naturally inspired by, but never hampered or restricted by a non-fictional reality.

Also, despite its stylized imagery, sterile futurism and high production value, sci-fi tends to allow for a specific kind of almost nostalgia framing of the topic at hand. Sci-fi almost invariably carries within it a sense of retro, ideas of the future tend to appear standard and cliché at the same time as they come across as visionary. In the case of Palestine, there is an eternal sense of forecasting statehood, independence and the end of occupation. The ambitious ideas that we hope to achieve have long since become so repetitive that the odd mix of nostalgia and accomplishment that the sci-fi genre often embodies lends it itself well to the topic.

Muhammad: Your submission to the Lacoste Prize generated some controversy for being “too pro-Palestinian” – can you give us some background on this controversy?
Larissa: After being nominated, I produced three photos for my upcoming Nation Estate project and submitted them in November. The piece introduces the idea of a vertical solution to Palestinian statehood – the entire population living in a single skyscraper. The museum praised the work and raised no concerns about its content – at least not to me.

A month later, I received a phone call from the museum director. He told me that my nomination had been revoked because Lacoste found my project ‘too pro-Palestinian’, as he described it, for them to support. The decision was final, I was told, so there was no room for discussion. The museum had defended my work, but to no avail.

As a form of protest against the Lacoste decision, the museum offered to show my work at a later stage – outside of the confines of the sponsorship. I was also asked to review a document. I automatically assumed that this document would be about the change to our contractual relationship, now that I was no longer in the competition.

Next day, a mail from the museum asks me to approve a statement saying that I had withdrawn voluntarily from the prize ‘in order to pursue other opportunities’. So the document for me to review was not related to the contract, but rather a statement aimed at masking the true reasons for my work being banned. Asking me to approve this statement struck me as even more shocking than having my nomination revoked in the first place.

Muhammad: Being an artist of Palestinian background do you encounter these kind of impedance in your work frequently?
Larissa: The Lacoste episode certainly stands out in many ways, but at the same time, this kind of pressure is not uncommon, and it has expressed itself in various forms over the years. I have experienced several calls to close down exhibitions I have featured in. These calls normally come from special interest groups opposing any kind of rights, let alone statehood to Palestinians. But there have also been attempts at muffling my work from people initially favorable to it. I have been asked by gallerists showing my work to change the title of my exhibition or a specific piece in order to avoid aggravating Jewish communities, for example.

Muhammad: You have also worked on a graphic novel with Oreet Ashrey, how did that come about?
Larissa: In my art practice, subject matter usually dictates the medium, and since artist Oreet Ashery and I both make use of ourselves in our works, we decided to incorporate ourselves in a graphic novel but as fictional superhuman characters. In the novel, we wanted to question the power of artistic practice, how much influence does art have on societal change and whether we are better off trading it for superhuman powers. The work is very much a tug-and-pull between a dystopian idea of art practice to a complete belief in its potency. In a way, it portrays a somewhat schizophrenic journey into the world of art.

In the Novel of Nonel and Vovel, we investigate critical strategies of resistance to the Israeli occupation of Palestine and to clichés that are present both in the world’s understanding of Arabs as well as in the making of art. The experimental novel tackles issues such as terminology and its effect on the unconscious collective understanding of the crisis in the Middle East, artistic agency and politics, representation of victim and oppressor, the psychology of victim-hood, race issues and Orientalism, history and its documentation and the role of art in engraving as well as subverting a historical narrative.

Muhammad: What do you think is the role of the artist in the society?
Larissa: It is always difficult for an artist, I think, to find a balance between being a critical commentator and taking on an activist role. I often find it uncomfortable to be put in the position of a political spokesperson detached from the artistic context. The mere fact that my artistic work is immersed in politics should not mean that I have to resort to same political discourse outside of art. There is a potency to political art that should be preserved as unique and its impact on the political dialogue cannot be underestimated. That is why it is a difficult act for me to juggle all these positions.

Muhammad: What projects are you working on in the future?
Larissa: I am currently working on realizing the Nation Estate film and photo project as originally envisioned. After a long stretch of pre-production, the shoot itself has just been completed, and I am currently fundraising for post-production. I am working with an unbelievable group of people who are all excited about this project and trying to make it happen. Among the people involved is a Danish theatre costume designer on the futuristic costumes in the film. An Iraqi musician is currently composing the electronic Arabic music score, and a film production company is developing the on sci-fi interiors for the Nation Estate building. The film and photo project is scheduled to premiere in August at the Centre of Photography in Denmark before traveling to Paris and Dubai later in the year. 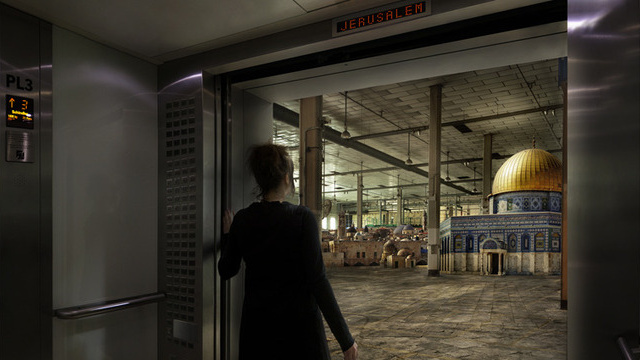 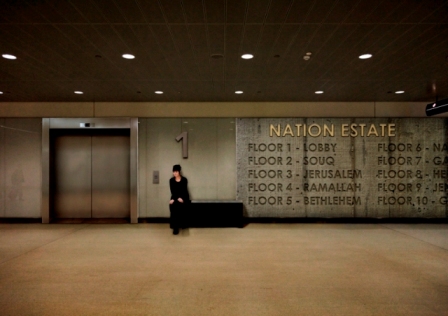