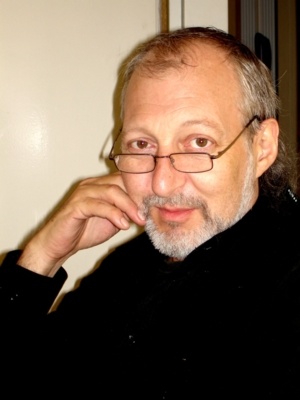 Backgound: This is the first interview in a series of interviews with Muslim Science Fiction authors and people who have written about Sciene Fiction with Islamic themes. Achmed Adolf Wolfgang Khammas has written on the subject of the lack of Science Fiction in Arabic Literature and has written Sciene Fiction stories himself. Achmed was born in Berlin in 1952 to a German mother and Iraqi father and grew up in Damascus. Currently he is also active in the field of sustainable energy.

M. Aurangzeb: You have written about the lack of Futurism in Arabic literature. Do you think the literary culture is going to change in the future?
Achmed: Off course I HOPE – but I can’t believe it … because of the lack of scientific thinking in the whole society. There are nearly ZERO new innovations, inventions, patents in the Arabic world. Also there is a BIG lack on the practical side. No modern industry, so everybody use imported mobile phones… but 99% don’t know ANYTHING about how they work, this is just ONE example.

M. Aurangzeb: What types of cultures do you think are more receptive to Science Fiction?
Achmed: Any cultures with a solid ground of good education, technical-industrial interest and understanding, open mind, forward thinking etc.

M. Aurangzeb: Outside of the Arab world what scope do you think Science Fiction has in the Muslim world?
Achmed: I can’t tell because I never lived there.

M. Aurangzeb: You also write Science Fiction yourself, can you please tell us about your work?
Achmed: I wrote half a dozen short stories since the 1980ies but never find the time for a novel. Also I started with sketches for a big ‘parallel-world’ work playing around 1830 at the time of Muhammad Ali in Egypt. I write only in German, because this is my first language.
My Stories are mostly ironic – and show sometimes religious influence. ‘Der Wettbewerb’ (The competition) is about the coming of the Messiah ,this is a part of my real life also, as ‘Mohammed Superstar’ tell the story of cloning the prophet Muhammad.

M. Aurangzeb:  What attracted you to Science Fiction in the first place?
Achmed: It opens my mind to new and newer and brand new ideas. Every story or novel is a kind of simulation of the recent world of today. Other people need to travel far away on holiday to recover. I only need a new space opera on 600 pages to read to be completely recovered. 🙂

M. Aurangzeb: What is your favorite Science Fiction author and why?
Achmed: Well – I think I will give an unconventional answer: They are some German authors as Wolfgang Jeschke (for his marvellous ‘Der letzte Tag der Schöpfung’ about the USA triying to steal the Arabian oil 65 million years back in the past) and Thomas R. P. Mielke (for his ‘Grand Orientale 3301’ in which the retarded Europe sells windpower-made electricity to the high developed arab countries).

M. Aurangzeb: Currently you are also involved in work related to sustainable development, can you please tell us about it and does Science Fiction inform this work or vice versa?
Achmed: And yes – in SF you find a lot of new ideas concerning energy … also you can notice the influence of renewable technologies on the modern authors. As example there is a great novel by Andreas Eschbach ‘Ausgebrannt’ (Burn out) about the ending of the Saudi Oil and the influence of this matter on modern German society. You can also have a look on my synergy website.*

M. Aurangzeb: Any words of advice for writers of Arab or Muslim background who might be interested in writing Science Fiction?
Achmed: Oh yes!! I would advice them to READ, to read, to read… and not ONLY Science Fiction. But they should as much as they could – and in any possible language. I mean, there are universes and universes of written imagination and not only Star Wars – or Matrix!. Then they should try to stay up to date in scientific development, also through reading in pages, newsletters, magazines etc. There happens SO MUCH recently that as a sci-fi writer you have to write quick … before reality pass by :-))
* Note: Achmed is referring the following website in German http://www.buch-der-synergie.de/ The following video clip has some information about his work with English subtitles: http://www.buch-der-synergie.de/trailer.html