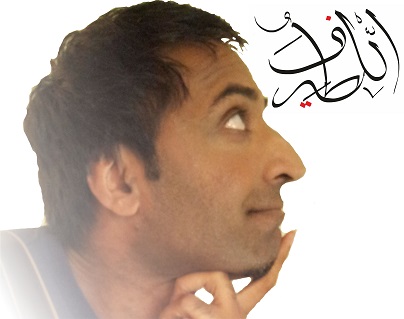 Here is Islam and Science Fiction’s interview with Razwan-ul-Haq who is a British Muslim artist and whom we had profiled last month.

1. What inspired you to become an artist?
Razwan: That’s a question as I get asked a lot. When growing up I never really thought of myself as an “Artist” in the sense of the word as used to define a career Artist. As a child, I would always be doing Art – mixing Islamic themes, particularly Arabic Calligraphy with stuff I saw around me. It just seemed natural and it didn’t bother me that I didn’t see anyone else doing the same in my neighbourhood. Slowly though, it began to dawn on me that not only is Art an expression of communication, but it is “being” itself. There’s a powerful force at work when composing Art. I think the way schools are geared today, there is little room for individualist thought and hence one’s own light is considered imperfections. It took me a long time to get over this conditioning, though I think I had a head start over others, as I was taught aspects of Islamic Calligraphy and Culture at home and had access to traditional materials used in Islamic Art. I think it’s important also to mention the living presence of Calligraphers around me. My Dad could write wonderfully and once I watched my Uncle compose such beautiful calligraphy, it seemed like magic! 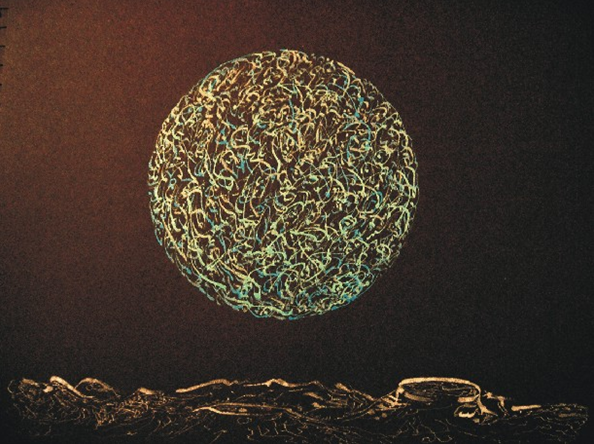 Above: Ayatul Kursi as a blue planet.

2. What are the main themes or influences that inform your work?
Razwan: I must credit the contemporary Calligrapher Ahmed Moustapha for showing the world how traditional script and calligraphy can be used in exciting ways. Themes from the Muslim world are of interest to me and I am inspired by historic and contemporary Muslim interpretations of the cosmos. I find that there is a spiritual depth also in Japanese and Chinese Calligraphy. I have been posing questions regarding the Minimalist tradition in Islamic Art for a while now and I have been trying to converse with minimalism whilst composing calligraphy. Meditation and reflection is key to my calligraphy.

3. How did you come to choose science fiction settings for your work?
Razwan: Science fiction, like Islam presents an alternate cosmology. In that sense, both deal with wider questions of the cosmos. In fact when I first began to learn Arabic, I began to see the Qur’an very differently. The Qur’an startled me with its cosmological view of reality. It posits a worldview from beyond space and time. Little wonder then, why early Muslims were great Astronomers. But what is less understood, is that there is a whole plethora of science-fiction written by early Muslim writers. Currently I am restudying this, in particular Ibn Nafis (d1288) and attempting to get to grips with what he and other early Muslim Sci-Fi writers were saying. I used to read wide a range of science-fiction and fantasy as well as Islamic texts as teenager. So I have been fed quite an SF diet. Sometimes science fiction creeps in without me knowing it! In my commission for the Tour De France 2014 for example, I I wasn’t overtly thinking of a science fiction theme, though after it was complete, someone remarked that the Arabic word looked like a man on a bike from TRON! 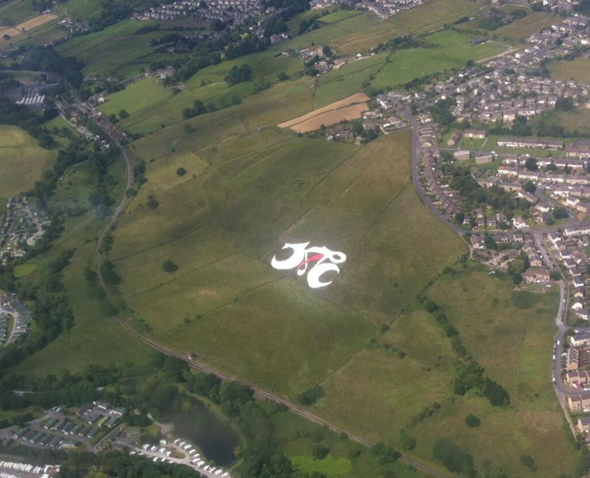 From the air! Sunlight reflecting off the word Al-Asr morphed into a bike, I was not thinking of TRON at all in the process of creating it!

4. What kind of reactions do you usually get regarding your work?
Razwan: I get the whole range of emotions, from baffled, mildly intrigued to sheer joy! Sadly nowadays people associate Islam generally with “religious” books. However in the past, Islam had an association with general life, and that included stories, fiction and science. It’s key to remember that this wasn’t proselytising the creed of Islam but simply that Muslim thinkers and writers were living “in harmony” with it. I have been told time and time again by well-meaning friends and colleagues that I should only concentrate on one aspect of my work. That I should only write or only do Art. They feel that a person can only excel at one thing. In my view however, I believe that this is a reductionist perspective and that Muslim writers and scientists have always been polymaths.

5. You also have a book on the Dracula, can you describe the project in a bit more detail?
Razwan: Certainly. Many years ago whilst at University, a fellow Turkish student mentioned just one sentence about Count Dracula and the Ottomans (Dr Kutluk Ozguven, now a Professor at Zirve University, Turkey) and that was enough to spark my interest in researching all I could about it. The book itself is over 400 pages and there are four aspects to it. First, it is a science-fiction-cum-fantasy story based on true events where there are hidden meanings within the narrative. Secondly, there are copious references to Muslim scientists and cosmology throughout the book. I have framed the edges of the pages with sayings of Sufi Mystics and created Art (along with guest Artist Sayra Bey) to bring the story alive. Finally, the book has been designed in a way that it is kept by the reader as something they can dip into at their leisure. I wanted to create something new – Islamic writers were once pioneers, and in a similar vein, I created a new format for a novel. It took many years of research and was launched at Waterstones in UK (the largest book chain here) in 2012, on the centenary of Bram Stoker’s death.

6. What projects are you currently working on?
Razwan: I am currently working on two projects. A series of new paintings for a new exhibition that looks at the Arabic Script in a fresh way yet keeps to the tradition. I am, Allah Willing, hoping to also use Farsi and Urdu along with Arabic. The second project is a series of books about a future sci-fi Islamic “city” which is called “Islamopolis.” I’ve already written over thousand pages on this, but there is a long editing and rewriting process under way, and it could be over a year till I am happy with the first of the books!

7. What are you plans for the future?
Razwan: We make plans, but sometimes we are pushed into different areas by the One. For now, I feel like exploring the Minimalist tradition in Islamic Art, Literature and Education. We live on earth for only a short period of time and if we can leave a bit of a legacy for the next generation then it’s been worth it!