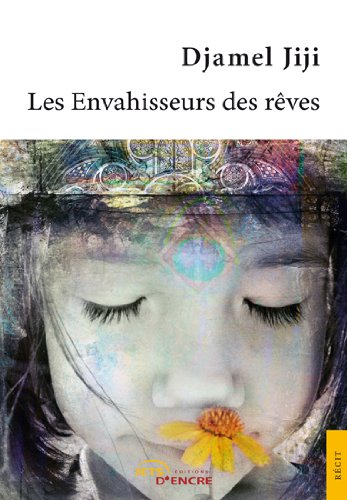 The Invaders of Dreams tells the story Jasmine, a little girl of six years old, who witnessed the horrific deaths of her father and her best friend Sara during a raid on her village in a unnamed Arab land under occupation. To escape her world Jasmine builds a holy world only for children that no adult can enter into, the realm of dreams. As the queen of her magical kingdom, she sentences War, Embargo and the Forces of Evil to death in front of all inhabitants of the kingdom.

But even in this dreamland there are enemies. The bloodthirsty King Walker decides to invade the realm of dreams, thinking his weapons of mass destruction can destroy the kingdom. For this mission he chooses his faithful commander Rams, a cunning henchman who knows that to be able to travel to the realm of dreams and return safely he needs the benediction of the great witch of King Walker’s kingdom, the sorceress Elena. Rams makes it to the realm of dreams, but while confronting the angels of truth (half bird, half human being), and in front of the spirits of the victims of children who were murdered in the last attack against the Freedom school (led by Rams himself), he cries and turns to dust. After the death of the major Rams, Elena decides to prove that she is the most powerful sorceress in the kingdom, sending the genius girl Liza, who was born on the six day of the six month of the six year. She was born with the 6/6/6 the evil mark on her left shoulder.

Will King Walker succeed in destroying the realm of dreams? And does this holly world where weapons of mass destruction have no effect on Jasmine and her best friend Sara really exist?

Djamel Jiji: My name is Boukhroufa Amar, my pen name is Djamel Jiji. I was born on 29 february 1964, I grew up in a small town called Ouenza which is in Tebessa Prefecture. My father was a taxi driver and my mother a housewife. My mother’s dream was that I become a doctor. Both my parents aren’t literate. After I finished primary school my parents moved to Annaba Prefecture where my father engaged as a bus driver for a large company. Annaba it’s a beautiful town looks like Alexandria in Egypt, which is around 600 kilometres away from Algeries the capital of Algeria. After finishing at secondary school I went to Setif University. Setif it’s the nicest town in Algeria which is around 300 kilometres from Annaba.

Annaba, it’s such a nice town, but I live in an ugly place, the worst city here, called Sidi Salem City. The houses were constructed since French colonization in Algeria and they are like hovels. Drug dealers, crime is widespread, there is no security at all and cops are corrupted. Writers are humiliated by the system. To escape this hell I create my new fantasy world and started writing fantasy stories defending the pains of innocent children and to forget all my pains.

Djamel Jiji: When I was at Setif University I joined the Theatre group of the University; it was the first time I discovered my writing tendencies. I wrote and directed two or three comedy plays. In my second year I left the group and I decided to concentrate all my time to my studies. I joined the Faculty of electronic engineering at Setif University. After that I quit the engineering department and I returned to Annaba University, where I did my bachelor’s degree in international law. At the moment I teach French to kids. For a while I had to sell men’s underwear to make a living. Life is very hard in Algeria.

Djamel Jiji: My favourite author is Gibran Khalil Gibran; I read all his books in Arabic ‘The Prophet’ remains the best novel I’ve ever read. I read it in Arabic, in French and also in English. George Orwell, Victor Hugo, Albert Camus, but I never read science fiction books; only Harry Potter. After I published ‘The Invaders of Dreams’ perhaps it’s seems strange to find a fiction and fantasy author who grew up reading books of literature more than fictional novels.

Djamel Jiji: It’s a big dream for me to imitate a great novelist like George Orwell. Djamel is my second name, given to me since birth. As for Jiji, that was name given to me by the editor. My editor’s name is ‘LES EDITIONS JETS DENCRE’ www.jetsdencre.fr with whom I published my first book.

‘Djamel’, means beauty. Jiji means, love people and desire to get along with every one you meet.

Djamel Jiji: I didn’t write my novella in French first, I wrote it in Arabic as a short play then I translated it from Arabic into French, and as you know in 1999 fantasy writing was a new genre in the Arab world. Perhaps it didn’t exist at all. I found it very difficult to publish my fantasy work with Arab publishing houses, that was the reason why I translated the book from Arabic into French by myself. Just follow the link bellow to visit the site and you will discover that the book was published since 2006 in Arabic. http://www.startimes.com/f.aspx?t=2623399

After I had published my first book in France with www.jetsdencre.fr in 2009, I wrote my first screenplay based on my own book in French first, then I wrote it in English, and in Arabic too. In 2011 I won my first literary prize in Lebanon. In the same year I was a semi-finalist with my first screenplay in the www.writemovies.com contest in Paris.

After the publication of my first novella, I spent six years looking for a producer. In 2015 I published the second part of ‘The Invaders of Dreams’ called ‘The Return of Jesus’ with www.edilivre.com in France. The original title was ‘Le retour de Jesus-Christ’; in this book I defended my religion – I’m a Muslim – even when the whole world became aggressive about it, as I unveiled the danger of weapons of mass destruction against innocent children. I invented a new fantasy character which doesn’t exist in first part.

Djamel Jiji: I ask about Iraq specifically because you mention how the village is short of medical supplies and baby milk and the question is posed, why we can’t produce these medicines ourselves. That sounds like a reference to Saddam’s Iraq to me. You also talk about ‘pretexts’ for an invasion.

Iraq was my inspiration to write my first novella, the consecutive raids at that time, and the damage left behind, there were many innocent children killed coldly and without mercy. I was shocked to see the majority of victims were innocent kids, I asked myself; why innocent children are always those targeted first during all ‘adult’ conflicts?  This simple question gave me the idea to write ‘The Invaders of Dreams’ غزاة الاحلام in Arabic.

Djamel Jiji: Oh my god! Not one of my readers asked me this question before, only you.  You haven’t only read the story; you have read my mind and the message which I wanted to send to the whole world through ‘The Invaders of Dreams’, that the peace envoys to the kingdom of dreams really refer to UN inspectors, and to Muhammad Al-Baradei.

Djamel Jiji: The name of King Walker, in the story refers to the ex-president of United States of America who was behind the destruction of all traces of life and civilisation in Iraq.

Djamel Jiji: No, it’s not exactly that; I wanted to unveil the danger of weapons of mass destruction against humanity and especially against innocent children. Nowadays, the latest nuclear missile can be launched and reach its target in a few minutes.

Djamel Jiji: I never read fantasy books before I publish my novel in France. The idea came from the bottom of my heart, I just described childhood emotions during war, and it’s my first time to hear about The Wizard of Oz – the poppies.

Djamel Jiji: The number 666, which some Christians have connected to Satan and see as a symbol of evil.

And in the story all the operations led by United States against Iraq, destroying such a holy city of Baghdad and killing innocent children, are connected to evil. The children of the magical kingdom being turned to ‘kamikazes’, it’s the impact of war on the mind of children. As we can see in the Syrian civil war, many children joined the rank of worried adults and became aggressive themselves.

Djamel Jiji: My inspiration comes from the many science fiction films I’ve seen. ‘Prince of Persia’, ‘The Death Note’, ‘Harry Potter’. I have seen all these movies after the publication of my first book. Fantasy allows us to grow our imagination and guide us to create our own fantasy characters.

Djamel Jiji: I’m not married. I have lived all my life defending children who are the victims of war. I have no children to go over my stories with them, only my nephew who lives in France who read the story; he was 12 years old at that time, he was quite happy. He asked me some interesting questions about the characters, he liked them a lot, and he asked me also about the title, he didn’t like the end of the story. He told me that this was the favourite fantasy book he has read.

Djamel Jiji: Stop killing innocent children and criminals must be brought to justice.

In my sequel, I argued for the equality of religions. All advocate peace and love. In the key chapter, “The Doors of Love” (chapter 19), Muslims, Christians and Jews gather and pray as they await the coming of the resurrected Jesus. The chapter begins with messengers of peace greeted at the gates of the Kingdom of Dreams with flowers.

When the Prophet Jesus comes to the kingdom, the children ask him questions, including the Queen Jasmine. They ask why are children killed when they are no threat to the adults? The answer is that they are the future, the successors. The dictators fear for their thrones from children. They ask if terrorism is because of religion and are told that it is instead the product dictatorship and Jesus calls on mankind to be patient and wait for the day of judgement and fight evilness and promote peace and love. The Prophet Jesus also consoles the children for their losses and we are told that Jesus, Jasmine, and Sara Siwandani are all examples of sacrifices. (One boy, Joseph, meets his mother at the Kingdom on this happy occasion, and she was murdered also by the occupation forces).

The children are advised that they avoid conflicts and adopt peace and love all the time. They are told that we will have tyranny as long as hatred and envy occupy hearts of adults. Mother Theresa is also there, a character who shelters children on an island from radioactive fallout.

The sequel is even more successful than ‘The Invaders of Dreams’, and was compared to Khalil Gibrain’s ‘The Prophet’, a comparison very close to my heart.

Djamel Jiji: Frankly in the Maghreb there are no fantasy writers, perhaps I’m the first one who wrote this genre of writing. I found this information recently after my first literary meeting in Annaba. In Egypt and after the publication and the translation in Arabic of the famous books of J.K. Rowling (Harry Potter), young writers started writing fantasy and science fiction. I recently read a new fantasy book called ملاذ’

Witten by Ahmed Salah El-Mehdi, it seems interesting as a fantasy story written in Arabic.

Djamel Jiji: If I was the minister of culture, in an Arabic country, the first thing I would do to improve the fortunes of fantasy, is to encourage producers to produce SF and fantasy films. When the film is well produced science fiction writers will get their opportunity in the Arab world and their books will turn into bestsellers.

Special thanks to Ahmed Al Mahdi and Ingi Diab.