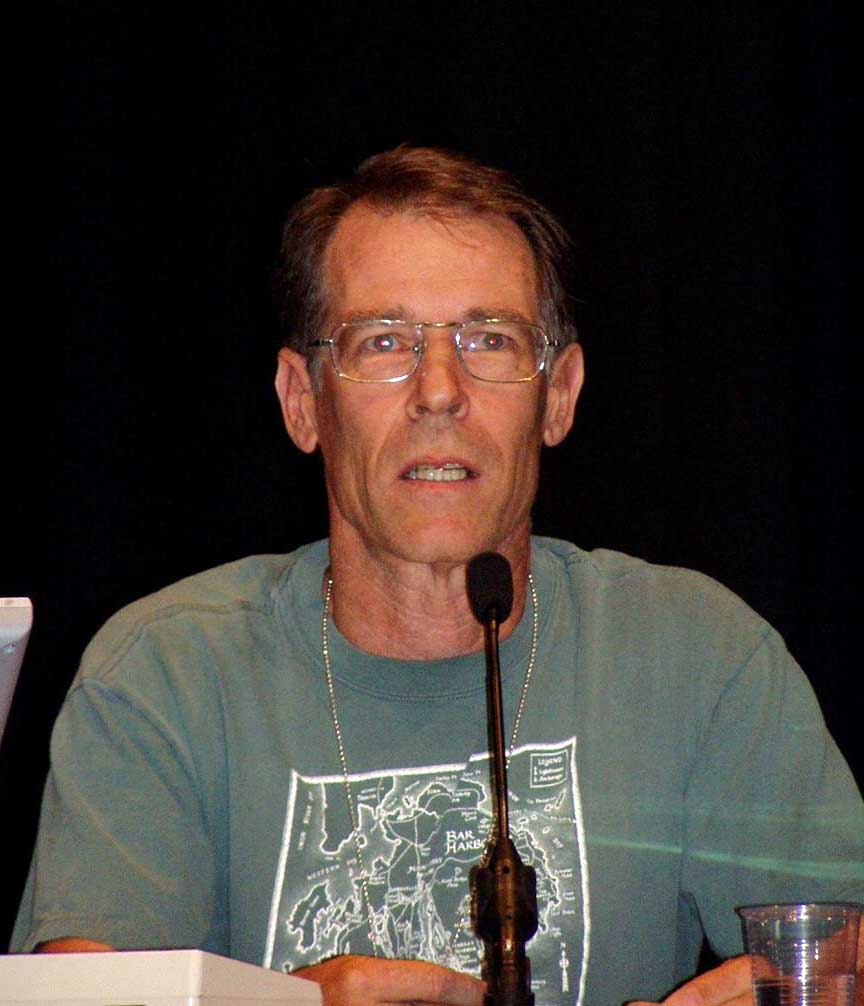 Kim Stanley Robinson is considered to be on of the greatest living Science Fiction authors. He has have a plethora of awards including  the Hugo Award for Best Novel, the Nebula Award for Best Novel and the World Fantasy Award. His most well known works are the Mars Trilogy, Years of Salt and Rice, Aurora and  2312. Here is my interview with Kim Stanly Robinson.

MA Ahmad: What was your inspiration behind writing Years of Salt and Rice?
Kim Stanley Robinson: This was simply an idea for an alternative history that occurred to me when I was young.  It seemed to me that alternative histories should try for a balance between maximum difference between our history and the alternative one, while also being simple to explain and also still comparable to our history (thus a completely different evolution is a different kind of story).  So when I had the idea of the Black Death killing almost all the Europeans in the early 15th century, this struck me as making a rather huge change in all subsequent events.  The problem was finding a form for any novel that could do justice to the idea.  So I held onto the idea from the 1970s through the 1990s, and after I wrote my Mars trilogy I felt I had worked out a novel form that could traverse hundreds of years and still work as a novel, so I started Years of Rice and Salt.  By then I had realized that one aspect of this different world should be the lack of a single hegemony, so that it wasn’t just a simple replacement for European hegemony, but more complex.  Thus the idea that China, Islam, India and the North American natives might all survive and flourish without one ever completely dominating became my preferred alternative history to portray.

MA Ahmad: One of the themes that recur in your novels has been described as how nature and culture reformulate one another, how do you think religions will be affected with new technologies and advances in Science?
Kim Stanley Robinson: It depends on the religion, I guess.  The Dalai Lama has declared that if science ever shows something in Buddhism is wrong, then Buddhism should change.  I don’t see the Middle Eastern monotheisms making that kind of declaration.  We are now in a scientific civilization, but it’s been coming for centuries and during those centuries, some religions have regarded science as a particular form of worship or devotion.  I think that might be the best angle for them to take, to make a reconciliation of fact and value, etc.

MA Ahmad: In your various novels you have given different visions about how the future of humanity may look like, which of the scenarios do you think is likely to come true?
Kim Stanley Robinson: None of them will come true exactly, that isn’t what science fiction is really doing.  Sf is a matter of scenarios with thick texture, which adds to their conceptual and entertainment value.  Right now the future could become anything from a complete disaster to a thriving sustainable civilization, and it isn’t possible to say which will happen; we have to choose and enact what will really happen, year by year.

MA Ahmad: Given the current social and political climate of the world, what are the responsibilities of a Science Fiction author?
Kim Stanley Robinson: I think it’s to portray a wide variety of possible futures, in stories that explore how history happens and exposes possible courses of action for evaluation.  It’s a real responsibility, which is shared by all art, which is to create meaning out of human existence, but sf has the extra burden and pleasure of exploring futures explicitly.

MA Ahmad: Given the political and social turmoil in the world large and Muslim world in particular what is your advice to Science Fiction authors and futurists working in the Muslim world?
Kim Stanley Robinson: This is a tough question.  I think of Orhan Pamuk’s young Muslim sf writer in his novel SNOW, struggling to find his starting point in the absence of a flourishing genre to work with and against.  Writers need a genre to serve as a kind of sounding board, amplifier, opponent, and so on.  No one can do the work of science fiction alone, it is a communal project.  So, in this case, I would venture that there needs to be a lot of Muslim science fiction of all kinds, exploring and displaying all kinds of futures.  It would be helpful to the imaginations of everyone alive, and a real service to humanity.  We all need futures in our heads to work toward or against, and the more there are, and the thicker their texture (to add to their believability and impact) the better.  It’s a huge opportunity for young writers.

MA Ahmad: What are the projects that you are currently working on?
Kim Stanley Robinson: I’ve just finished a novel describing a big sea level rise following on climate change, centered on lower Manhattan, which has become something like a super-Venice, and describing a kind of financial revolution leading to a post-capitalist global economic order.

Now I’m thinking about China and again, and the future relationship between China and America.  I think I need to go at this one from an American angle, being an American—I don’t have the same boldness that I did when I wrote The Years of Rice and Salt, or maybe I just want this particular angle to make my story go.  We’ll see after I’ve visited China, which I will do for the first time later this year.