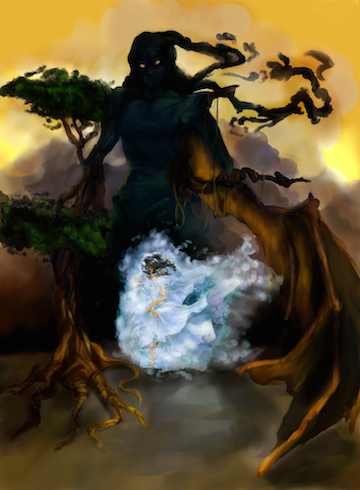 Moustafa “‫مصطفى شملي‬‎” Chamli’s team from Studios/Lunes is working on a fascinating game inspired from Islamic Escathology. The game puts you in the seat of Azrail who is the Angel of Death and who has to perform one last task – the of the Universe but something something goes wrong. Here is the description of the game from its official website:

الآخرة (“Afterlife”, pronounced “Al Akhira”) is a story about death, forgiveness and the End of All Things. The end of the world has arrived and it’s your job to see it through. You are the Angel of Death, Azra’il, sent within a human host to carry out your final task: the End of All Things. The apocalypse doesn’t go according to plan and a group of humans manages to avoid total annihilation. Your soul is separated and distributed among the humans, your body imprisoned and bound by ancient words. You escape these bounds after some time, but will you seek revenge–or heal yourself? Presented in the form of an action platformer, الآخرة has players move through the destroyed remains of the world and travel through the world’s afterlife as the Angel of Death. Each game locale is shaped by its corresponding geographical area and the beliefs that colour that region’s culture. الآخرة is an adventure that will truly take you to the ends of the earth and beyond!

We recently interviewed Moustafa and here is the transcript:

M. Aurangzeb Ahmad: First off, how did you become interested in speculative fiction?
I think the short answer to that is that I’m a nerd.
Moustafa Chamli: The longer answer is that I grew up primarily with two movies following me most of my life: Moustapha Akkad’s al Rissalah, and Richard Donner’s Superman. I’d say a combination of the aforementioned movies, anime (by way of Grendizer), video games, classic novels, and comics inevitably brought me to things like Star Trek, Star Wars, Firefly, and other pieces of speculative fiction or fantasy.

Curiosity about emergent tech, usually in the form of video game consoles and anything related to space travel also helped fuel the more practical side of things.

M. Aurangzeb Ahmad: Your project Al-akira sounds quite interesting. How did it come about, the name, the conceptualization, history etc?
Moustafa Chamli: Al Akhira, it honestly started as what I can retroactively call a pretty bad comic book idea, which originated in my teen years. It was set in a post-apocalyptic world, with a bunch of supernatural ghoulies running around causing trouble. The main character was the generic trenchcoat wearing, angry young man who was a vampire that was actually a demon (like I said: pretty bad). It’s when I figured that it could only end with the end of the world that it actually started to mature into its current form, with a series of “what if” questions:

What if the main character didn’t want to end the world, but had to do it?
What if he wasn’t angry, but guilty?
What if he was living a two-soul situation?
What if the overarching mythology took inspiration from Islam, instead of Judaism or Christianity?

At that point, I started taking into account various stories (many of which are apocryphal or simply interesting) with regards to the Angel of Death in Islam, one of which he asks a mourning family why they cried since he was just doing what he was created for. Becoming a dad raised the notion of responsibility, both for our actions and our mistakes.

It became clear that the type of story I wanted to tell couldn’t work in comic book form, since I didn’t want to proselytize. I wanted a visual medim, and I wanted to let the person gleam a message through interaction. So it had to be through video game form.

As for the name, that came because the story is about endings on many levels. I chose to have a purely Arabic name after seeing the works of calligraphitist El Seed, and Lebanese band Mashrou3 Leila, who chose to maintain an Arabic identity, even though their works were made for a wide reaching audience. It gave a sense of celebrating a cultural identity, while neither conforming to or confronting a euro-centric ideal.

I would say that covers the thought process, which took years, and various bits of inspiration. It’s pretty much the opposite of the elevator pitch, but you already read that on the Studios LU/NE website.

M. Aurangzeb Ahmad: How would you describe the reception of Science Fiction in Lebanon?
Moustafa Chamli: I wish I could provide a proper response to your question. We migrated to Canada when I was fairly young, so I found myself at a sort of disconnect to the culture at the age of six. I do ask family members about life there when I can to get a feel of things.

Pressed for a full response, I’d say that the emergence of a new wave of Arab culture, whose effects range from pop music to speculative fiction shows that there’s a need to go beyond the old standard stories and into something that would help the young hopeful against what seems to a bleak future. In other terms: Science Fiction creates a future when we can’t see one, and allows us to push towards that.

M. Aurangzeb Ahmad: What are the main inspirations for your work?
Moustafa Chamli: For al Akhira, if we’re going for video games, it’s very much influenced by the Prince of Persia games and Legacy of Kain: Soul Reaver. White Wolf’s original World of Darkness also permeates a lot of the design decisions.

M. Aurangzeb Ahmad: What about the works in Science Fiction and Fantasy that you find inspiring?
Moustafa Chamli: I think it’s the escape from life’s relative mundanities or dangers. I mean, the world itself is awe inspiring, but we get lost in our day lives that we forget how beautiful everything is. I think Science Fiction and Fantasy tends to make that very real by making everything bigger and bolder.

If I may take an example of the work being done here, and somewhat going back to the previous question, the knowledge that there is some Islamic-themed Scifi (as per the Mosque Amongst the Stars) , Fantasy (Throne of the Crescent Moon comes to mind) and even comics (The 99 and Element Zero) being made by Muslim writers will be seen by future generations as the “the thing that kept them going” when things seemed bleak.

Even seemingly dark stories, like what I’m working on with al Akhira, has that possibility, since there’s always room for hope in the worlds we make.

M. Aurangzeb Ahmad: Have you worked on other sci-fi or fantasy related projects in the past?
Moustafa Chamli: I had worked on The Sundered Heavens, a fan-made extension to White Wolf’s Demon: the Fallen RPG games way back in 2007. It’s there that took a proper first jump into writing fantasy and game making.

M. Aurangzeb Ahmad: What is your vision of the Al-Akhira project?
Moustafa Chamli: Al Akhira is more or less an extension of that project (The Sundered Heavens), at least on a conceptual scale. On the surface, it’s a game about the end of the world and parkour with some combat and an Arabic/Islamic vibe. On a deeper level, we’re exploring metaphysical questions on the nature of death, and what forms it takes.

I want something that can be appreciated on a quick glance, hence the toon shaded aesthetic, but I also want people to enjoy the game without ever feeling like they’re being proselyted, talked down on, or even told what to think. If we do this properly, there should be some interesting conversations happening around the project.

M. Aurangzeb Ahmad:  What is the current status of the Al Akhira project?
Moustafa Chamli: It’s still at the early development stage. We have some art produced, but there’s still quite a bit of the basic code to be written. This is mainly because we’re working on the project on a part time basis, until such time that we can acquire some funding for the project.

M. Aurangzeb Ahmad: What is the timeline that you have in mind?
Moustafa Chamli: Optimistically, if we can manage to work on the game full time, we would have more complete build of the game within a year. This, unfortunately, is very much dependent on us being able to secure funding, or getting a lot of pledges on our ongoing crowdfunding campaign. (the number shown isn’t the full projected budget)
http://studioslune.com/pledge/ 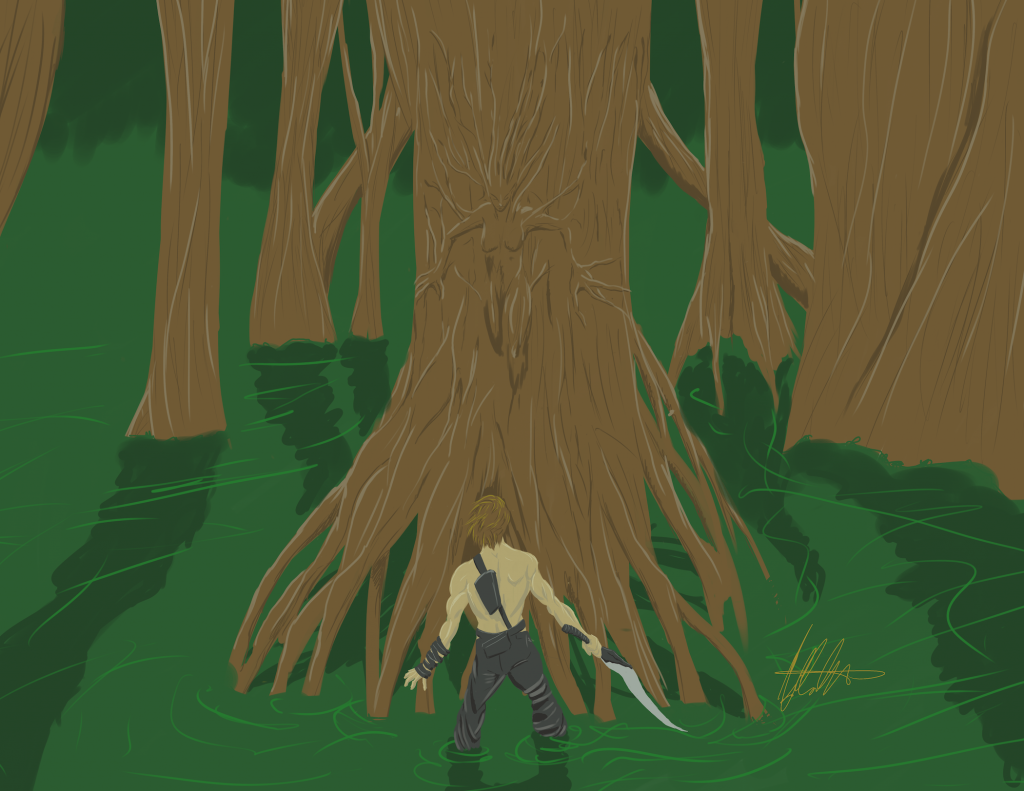 Note: All of the artwork on this page is from the Al Akhira project