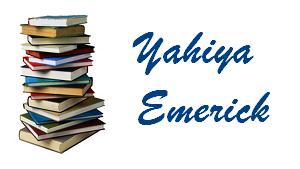 Background: The people who have been interviewed by Islam and Sci-Fi have been Science Fiction authors. This time we are breaking with tradition and interviewing an educator, Yahya Emerick, who has a keen interest in Science fiction. My main motivation is to get some idea about how Science Fiction is received in the wider Muslim community. Yahiya Emerick is an educator and author. He has written a number of youth chapter-style adventure novels: Ahmad Deen and the Curse of the Aztec Warrior, Finders Keepers and Other Stories, The Seafaring Beggar and Other Tales, Ahmad Deen and the Jinn at Shaolin, Layla Deen and the Case of the Ramadan Rogue, Isabella: A Girl of Muslim Spain.

Muhammad Aurangzeb Ahmad: You have written about your love for science fiction and the importance of Science in your writings. What role do you think Science Fiction can have in a community?
Yahya Emerick: The importance of imagination can never be underestimated.  When one imagines a future world, they can begin to take actions today that will help bring their vision into reality.  Science fiction writers imagined such things as space travel, lasers, rocket engines and a hundred other things before they were ever invented.  These musings on their part gave a blue print for later generations to follow in their inventing and exploration.

Muhammad Aurangzeb Ahmad: Do you think there is a general lack of interest in Science Fiction in the Muslim community?
Yahya Emerick: Not to sound alarmist, but it has been my experience that any type of fiction in general has had a hard time opening the door in most Muslim homes in the Western world.  This is ironic given that Muslim immigrants come from cultures that are rich in folklore, mythology and the ever-present ‘jinn stories’ which could easily be transformed into a love for alien stories!  I’ve known the odd Muslim kid here and there who likes sci-fi/fantasy, but there’s not been any real groundswell of interest there.

Muhammad Aurangzeb Ahmad: As an educator what measures would you recommend in encouraging interest in Science Fiction in the Muslim community?
Yahya Emerick: English class needs to broaden its horizons in reading selections.  I’m sorry to say it, but the mainstream English Language Arts textbooks that most Muslim schools use are so sanitized by the publishers to avoid offending anyone that the stories are truly dull and without imagination.  Muslim teachers can bring in sci-fi/fantasy and find a greater interest in reading.  Afterall, most kids prefer such stories because it makes them think and presents an alter-world to imagine.  That’s why Harry Potter, the Twilight Series and a hundred others of the same type always dominate the book and movie markets.  At home, Muslim parents can keep some Asimov or Arthur C. Clark stories around, but I wouldn’t hold my breath.

Muhammad Aurangzeb Ahmad: Amongst the Muslim youth one does find many enthusiasts of science fiction but not enough people who produce science fiction. What factors do you ascribe to this producer vs. consumer effect?
Yahya Emerick: Obviously, there are no producers of science fiction directed at a Muslim audience.  It’s not really important, of course, because space ships are space ships, but I’ve found it interesting if a Muslim character pops up now and again.  The “Pitch Black” series had references to positive Muslim characters, and there was a two-book series published about 20 years ago that envisioned a future space age dominated by Muslims.  Funny thing is, that series went out of print and literally disappeared.  (Crescent in the Sky was the title of one of those books.)

Muhammad Aurangzeb Ahmad: Do you think that Muslims and Arabs type casted in Science Fiction stories in general?
Yahya Emerick: I think that Muslims and Arabs are non-existent in science fiction stories, save for the couple I mentioned above.  Muslim/Arab-type characters appear in fantasy stories more often though, such as in video games or movies.  (Drakensang, the game has a playable Muslim character.  The Prince of Persia or even the Mummy have Arabesque-like cameos.)

Muhammad Aurangzeb Ahmad: Has the current political climate effected portrayal of Muslims in Science Fiction?
Yahya Emerick: In action movies and books, the Muslims were always the bad guys.  But I’ve found that in fantasy portrayals they are presented in more ambiguous roles.  (Think of the Arab character on ‘Lost.’)

Muhammad Aurangzeb Ahmad: Who is your favorite Science Fiction author?
Yahya Emerick: I like several of both the Sci-fi and Fantasy genres.  I like Asimov, Donaldson with his Ill-Earth series, Clifford Simak, Arthur C. Clark, Micheal Moorcock, Paul Anderson and almost all Star Wars books.

Muhammad Aurangzeb Ahmad: What advice do you have you young and burgeoning Muslim authors who may be interested in writing Science Fiction or even other literary endeavors?
Yahya Emerick: I forget her name, but the world’s best selling Romance genre author was asked this question, and she said the secret to her success was simple: Sitting in your writing chair and producing.  So let’s get to it!  Take hold of your passion and get that word processor in motion.