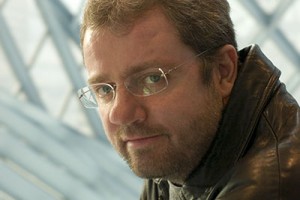 About Matt Ruff: Matt Ruff is a well known novelist whose work has won numerous awards inclusing being long-listed for the 2005 International IMPAC Dublin Literary Award, winning the 2007 James Tiptree, Jr. Award, Washington State Book Award, two PNBA Book Awards, and two Washington State Book Award. Matt has also recieved the National Endowment for the Arts Literature Fellowship in Prose. He has published five different novels with Mirage bring the latest one. Mirage is an interesting an nuanced take on the Alternative History genre where the roles between the side are reversed in the war on terror.

Muhammad Aurangzeb Ahmad: Mirage is set in an alternative world where the sides in the war on terror are flipped, what inspired you to write this novel?
Matt Ruff: It grew out of a desire to tell a story about 9/11 and the War on Terror that wasn’t just a cookie-cutter version of what other writers were doing, but that would explore the issues involved from a unique angle. I wanted it to be an engaging read that also gave you stuff to think about. Other items on my wish list were that I wanted to give a more central role to ordinary, non-terrorist Arab Muslims who typically got short shrift in stories like this, and I wanted to create a more naturalistic portrait of Islam.

And my solution for accomplishing all this was to turn the world upside down: to create a classic 9/11-themed thriller, but with Iraqi protagonists, set in a reality where Arabia was the world’s superpower.

Muhammad Aurangzeb Ahmad: In many cases the countries, ideologies and even personalities are the mirror images of their counterparts in the real world, do you believe that it is the circumstances that make people who they are or was there some other idea at play when you were writing this?
Matt Ruff: Without giving too many spoilers, much of the mirroring comes from the fact that what I was trying to evoke was not so much a realistic Arab Muslim democracy as the more fanciful version held out by the Bush administration as an enticement for invading Iraq: the one that was supposed to spring forth magically from the ashes of Saddam’s kingdom, without any real effort or concern for historical context.

On the level of individuals, I think we’re bounded and shaped by circumstance, but ultimately the kind of person you are is up to you. One of the rules I devised for the mirage world is that people’s basic characters wouldn’t change, only their job descriptions. So Saddam Hussein is still a wicked man, but since he can’t be a dictator, he becomes a gangster. Osama bin Laden is a warmongering politician. And my protagonist Mustafa al Baghdadi struggles to be a good man, as he would in any world, within the limits of the choices life has handed him.

Muhammad Aurangzeb Ahmad: What kind of research did you do in writing the novel?
Matt Ruff: I read up on the history of the region and on the famous personalities involved, so that I’d know just how much my alternate reality was changing things. I read first-person accounts and reports of life in Iraq during and before the war, and other material that I thought might provide useful anecdotes. With Islam, I tried to be careful about getting specific points of theology right, without falling into the trap of confusing religious orthodoxy with the diverse ways religion is actually practiced by members of the faith, particularly in a free society.

Muhammad Aurangzeb Ahmad: What is the main lesson that you want your readers to draw from this novel?
Matt Ruff: I’m reluctant to spell out specific lessons or messages. What I try to do in The Mirage is show readers a world and people they think they know from a very different perspective, and trust them to draw their own conclusions from that.

Muhammad Aurangzeb Ahmad: Do you believe in the inherent goodness of humankind and the capacity of speculative fiction to highlight or even bring it out?
Matt Ruff: I’m temperamentally an optimist—sometimes naively so—but I guess what I believe in is the inherent humanness of humankind. Which is to say, the ability of all people to commit both good and bad acts. I’m pleased by the former, disappointed by the latter, and not especially shocked by either.

And yes, I think speculative fiction can portray human nature as well as any kind of fiction can, and perhaps inspire people to do better.

Muhammad Aurangzeb Ahmad: The world of Mirage seems very ripe for an expanded universe, any thoughts on this?
Matt Ruff: Well, my original idea was that The Mirage would be a TV series. But at the time—this was late 2006/early 2007—the concept was simply too controversial for any American TV network to want to touch, so I decided to do it as a novel, which was actually OK, because it meant I had much more control over the story.

With the passage of time I think the subject matter has become at least somewhat less radioactive, so who knows, if the book does well enough, maybe a TV series could still happen. Certainly you could expand the basic arc of the story to allow side trips into other parts of the mirage world and a much deeper exploration of the characters.

Muhammad Aurangzeb Ahmad: What are you favorite Science Fiction and/or Alternative History authors?
Matt Ruff: My favorite alt-history novel would probably be Robert Harris’s Fatherland. Philip K. Dick also looms large, though if I’m honest I usually like his ideas more than his execution of them. Other writers in the broader speculative fiction field who I feel a close kinship to would include John Crowley, Shirley Jackson, and Neal Stephenson.

Muhammad Aurangzeb Ahmad: Mirage is very different from the previous work that you have published, are there common threads that link the various works that you have written?
Matt Ruff: I think the two most persistent themes in my work are seeing the world through other people’s eyes—including people we may not like very much—and figuring out how to get on in a world where people will always disagree but have to coexist anyway. Both of those themes are very well represented in The Mirage, I’d say.

Muhammad Aurangzeb Ahmad: After Mirage, what is the next project that you are working on?
Matt Ruff: My most likely next project is a novel called Lovecraft Country. It’s set in the Jim Crow era and concerns an African-American travel writer and pulp-fiction geek who drives around the U.S. reviewing hotels and restaurants that accept black customers. So, another attempt to view a familiar reality through a different set of eyes—and have some adventures along the way.