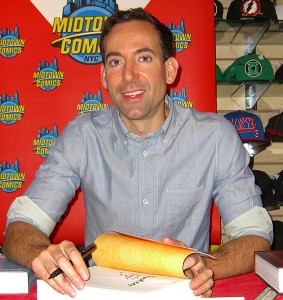 M Aurangzeb Ahmad: What inspired you to write comics?

Craig Thompson: I grew up in a working class family with little access to arts or literature, other than the most accessible of visual mediums – the Sunday Funnies in the weekend newspaper. It was a religious household, so all the media were censored by my parents – movies, television, music – but comics, because they were “for children” were below the censorship radar, so it was the medium my little brother and I were able to access the most edgy storytelling. During adolescence, I fell out of love with comics. In a Biblical sense, I attempted to “put aside childish things”. But then found that comics was a medium that was growing up alongside me. When they imprinted on my childish self, comics were a form of escapism – of escaping the confines of my sheltered life. But as an adult, comics are a form of connection and interacting with the real world.

M Aurangzeb Ahmad: Blankets is your well known work and is autobiographical in nature, what inspired you to write it?

Craig Thompson: Blankets, at first, was a reaction against the typical storytelling that comics were known for — the explosive fantasy epics that unfold and resolve in 24 pages. Instead, I wanted to make a huge comic book (almost 600 pages) where absolutely nothing happens. At least nothing explosive or epic. The drama is emotional and internal and the setting is the quiet, intimate space of a bed. That was my goal — to capture the experience of sharing a bed with someone for the first time. When I meditated on my own experiences, not only a coming-of-age high school romance, but the bed my little brother and I shared through early childhood, a narrative began to fall in place. The autobiographical elements emerged reluctantly, but gave BLANKETS the vital sense of authenticity and vulnerability.

M Aurangzeb Ahmad: Who are your main influences, in your life as well as your work?

Craig Thompson: HABIBI, specifically, was influenced by Karen Armstrong’s incredible compendium of monotheism HISTORY OF GOD and Arundhati Roy’s examination of dams in India: POWER POLITICS. In life, I often look to my friend Pegi Christiansen as mentor. She was my English teacher in art school. I only stuck with art school for one semester before dropping out, but appropriately it was English class that inspired this cartoonist far more than any visual discipline. And just to round out all this feminine energy, I absorb a lot of motivation from my dear friend and peer – painter Dan Attoe. Dan and I have known each other since we were young, both guys from humble working class roots who went on to have careers in the arts – and his no nonsense attitude towards creativity has pushed me through some of my whiney, neurotic moments.

M Aurangzeb Ahmad: What inspired you to write Habibi?

Craig Thompson: After BLANKETS, I was sick of drawing high school renditions of myself and mundane midwestern landscapes. I wanted to craft something outside of myself, something bigger than myself, and was considering two trajectories — the classic fantasy epic with dragons and elves and whatnot — or a nonfiction piece of political/social relevance like the comics journalism of Joe Sacco (FOOTNOTES IN GAZA). HABIBI ended up meeting in the middle. On a personal level, I’d always wanted to do a book about sexual trauma, and the characters of Dodola and Zam – two escaped child slaves – were the perfect roles to unravel this story. They arrived in my sketchbook almost fully realized – a gift – but I didn’t know what sort of world they inhabited. I found a home for them in the fantastical landscapes of A THOUSAND AND ONE NIGHTS. I became excited for the latter as a fantasy genre (much like super heroes or crime noir, etc.) and savored the stories for their adventure and bawdiness and humor, but questioned whether these elements were intact from the original arabic folk tales or imposed by a British colonialist Richard Burton. At which point, I sought a deeper reading of these tales in the Islamic arts.

M Aurangzeb Ahmad: What kind of background research did you do in writing Habibi?

Craig Thompson: The core of research around HABIBI was simply conversation. I must shamefully confess that before the book, I didn’t have any Muslim friends! Such is the limiting nature of social circles. But HABIBI motivated me to seek those connections/friendships and greatly enrich my life.  These meditation on Islam and the arabic language was born directly out of my new friendships, especially exploring the vivid connections with my Christian upbringing.  The visual fuel for HABIBI was from book reference – on calligraphy, ornamentation, geometric design, architecture – all these art forms that evolved so profoundly because of a supposed prohibition against representational imagery. Nothing in the book is specific to any geography or time period. Rather it borrows fast and loose from all over the world, Most of all with HABIBI, I trusted my imagination. The backdrop is a dreamscape. The story is a fairytale. The characters of Dodola and Zam are as I described, a gift, that arrived fully realized from outside of me, but that I felt a parental bond to – and a responsibility to explore their stories on paper.

M Aurangzeb Ahmad: Arabic Calligraphy also features prominently in Habibi, what was your inspiration behind that?

Craig Thompson: Arabic calligraphy has been described as “music for the eyes” which sums it up perfectly. The cartoonist Chris Ware talks about comics as sheet music – because the reader needs to know how to interpret the symbols, like notation, to unlock the musicality of the page. Ware describes comics as “pictures you READ”. Whereas, calligraphy is words you LOOK at. You can savor arabic calligraphy for its surface aesthetics, as beautiful as any painting, and its fluidity. That fluidity is key. I have great envy of the arabic written language, because Romanized letters are so clunky and abstracted. The fluidity in a language must influence fluidity in culture and worldview. And this is the core thread in HABIBI – when the fluidity dries up or is blockaded – environmentally, emotionally, sexually, and spiritually – how to you restore that flow?

M Aurangzeb Ahmad: Is there a common thread between Blankets and Habibi?

Craig Thompson: Both books explore religion, spirituality and sexuality. BLANKETS is quiet sparse and breathable – like a stark Wisconsin snowscape – while HABIBI is dense and swirling and epic, like the Islamic arts it draws fuel from. BLANKETS has an innocence and naivety to it, while HABIBI is necessarily more dark and expansive – at times apocalyptic. But in any case, both books are love stories.

M Aurangzeb Ahmad: Elements of Islamic art like Calligraphy and Geometric designs as well as the prophets permeate Habibi, and you have mentioned influence from Impressionists also. Have you looked into the work of the Muslim impressionist – Ivan Augeli?

Craig Thompson: Before you mentioned him, I hadn’t known of Aguéli. But I appreciate very much his paintings. A bigger influence, perhaps, is Kahlil Gibran, whose work also crosses over into multiple worlds. I love that he both wrote AND drew – like William Blake, but perhaps with more sensuality and poetry. Other influences are the calligraphy of Lassaâd Metou, the poetry of Nizar Kabbani, and the very accessible Sufi beauty of Rumi.

M Aurangzeb Ahmad: How would you describe your experiences with Muslims in general? Did your interaction with Muslims changed some of the perceptions that you may have had before having Muslim friends.

Craig Thompson: It’s impossible to generalize any group of people, but the Muslims I know are generous and brilliant and fun. And I can only speak for my friends, but they’re far more open-minded and eager for dialogue than the religious communities (evangelical Christianity) I grew up in. It’s not that I had preconceptions or prejudices before, as much as I was socially-lazy. I already had an intimate group of peers, and was too sheltered to extend and diversify that social circle. Thankfully, creative projects have a way of piquing your curiosity and prompting you out of your established ruts.

M Aurangzeb Ahmad: Do you have advice for people who would like to enter the domain of comics?

Craig Thompson: 1) It’s easiest if you can both write AND draw. For me, that’s what comics are, the synthesis of both disciplines. Many creators that went on to focus exclusively on writing initially drew their own work, like Alan Moore and Brian Michael Bendis. 2) Start with baby steps. First, a one page strip. Then a short story. Then a short “graphic novel”. Then a big 600 page book. But don’t leap into the latter first. 3) FINISH something. It’s the best way to learn – to see a project through to completion. It’s the only way the story can have a life OUTSIDE of you. And it’s also the only way you’re going to get a publisher to bother checking your work out.

M Aurangzeb Ahmad: You just came out with Habibi, what new projects await Craig Thompson in the future?

Craig Thompson: Finally returned home from two and half month long tour, and am just beginning to dig into three new projects. Each of them is entirely different from HABIBI and from each other. One is for all ages, including kids, a playful spaceship epic – an opportunity for me to have fun again and to speak to the child in me that first discovered the medium. The second project is not for children at all – it’s an erotic book. Because though BLANKETS and HABIBI both explore elements of sexuality, I’ve yet to do a book that is directly about sex. Finally, the third book is nonfiction, a long form essay of sorts. The comics medium has barely been tapped as a vehicle to delve into nonfiction topics, though Scott McCloud’s self-referential UNDERSTANDING COMICS is the best example I can think of. 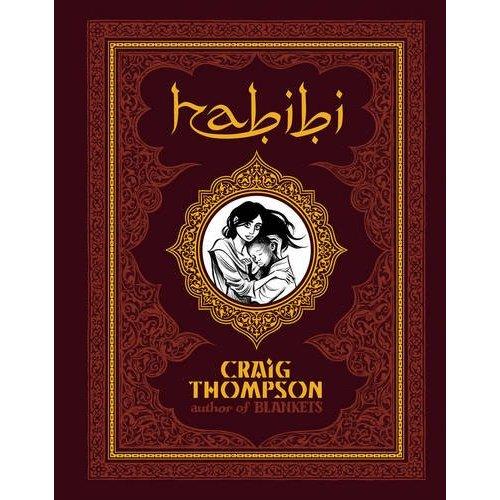