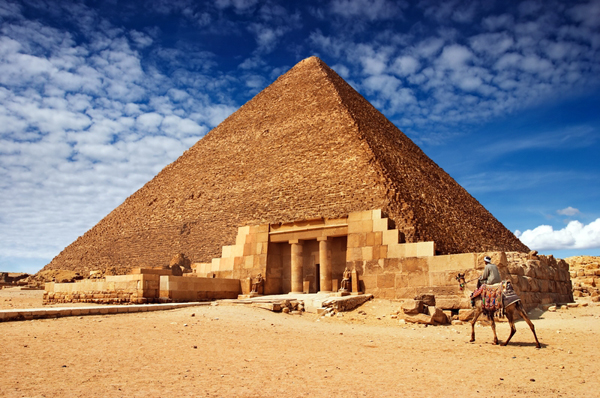 Note: The following interview of the Egyptian author Mr Ahmed Al Mahdi was conducted by Emad El-Din Aysha for Islam and Sci-Fi-Fi

Mr Ahmed Al Mahdi is a 26-year-old Egyptian fantasy and sci-fi writer who wrote his first novel when he was twelve, and already has several acclaimed novels under his belt, publishing across the Arab world. He was born in the Southern Egypt, the province of Assiut, on 1st October 1991. He currently resides in the province of Giza, which borders the governate of Greater Cairo. (Cairo is much like the Capital in The Hunger Games, if you know what I mean).

Mr Al Mahdi spends his time, all his time, writing. He isn’t married and doesn’t have kids – they make an awful racket, he admits – and in between creative sessions he translates graphic novels from English into Arabic. How was it, then, that I was able to meet one of Egypt’s premier fantasy writers? I bumped into him, quite literally, at an event celebrating the successful translation into Arabic of Ursula K. Le Guin’s A Wizard of Earthsea. This is a cosmic coincidence in its own right. I’m a hardcore sci-fi buff and rarely read translations of English-language literature into Arabic, and least of all of fairy tales. And Le Guin’s novel is fantasy to boot.

But how can you say no to the author of sci-fi classics like The Left Hand of Darkness, The Lathe of Heaven, and “The Ones Who Walk Away from Omelas”. Anything that sharpens your imagination is welcome, especially in these trying times, and it’s not like there were any events celebrating the successful translation of SF works into Arabic. (What a ‘curious’ absence).

The ever-fungible border between fantasy and science fiction is a key topic at hand, if only to make sense of the literary terrain in Egypt and other not so far flung reaches of the Arab world. The prospects for Arabic science fiction hangs in the balance.

EEA: A brief introduction. How many books have you published and of what kind? Novels, short stories, picture books (for children), graphic novels (for teenagers), etc.? And in what language?

EEA: Do you consider yourself a science fiction writer or a fantasy writer?

AAM: I write in both fields, but my published works are in fantasy.  I love writing fantasy more, and I consider myself a fantasy writer more than a sci-fi writer.

EEA: How do you define SF compared to fantasy? And why would you class yourself in one compared to another?

AAM: SF and fantasy share some elements of imagination and exploring new worlds and ideas. However, SF starts with the base of a scientific theory and expands on it more, exploring new possibilities, while fantasy in my opinion is pure imagination, and relies more on mythology and fairytale elements.

AAM: The tales of my grandmother attracted me to fantasy, after that my mother bought me the books of “The Green Library / المكتبة الخضراء” which was a series of books for children with themes of fantasy and fairytales like Alice in Wonder Land and Little Red Riding Hood. When I grew up I read the novels of Harry Potter, watched the movies, and watched the Lord of the Rings trilogy, and more fantasy stuff that made me realize that I love fantasy more than any other genre. I have read many fantasy novels, some in Arabic like Harry Potter, but mainly I read in English. My favorite authors are Lord Dunsany, J.R.R. Tolkien, Paul Anderson, Michael Ende, Michael Moorcock, Lewis Carroll, Stephen King, H.P. Lovecraft, Edgar Allan Poe, W.B. Yeats, and Ursula K. Le Guin. Since childhood, I wanted to become a writer and I wrote my first novel when I was twelve years old. I joined the Faculty of Arts, Department of Arabic Literature at Cairo University solely for this purpose. After spending two weeks in the Engineering Faculty I decided to chase my dreams. Now I write stories for children’s magazines and literary criticism articles on Arabic websites, with three published books and I hope to continue as a writer.

EEA: What do you think of the current state of sci-fi and fantasy in Egypt? Is there are large readership? What’s the age range? Have the critics (on television and in newspapers) recognised it? Can people (publishers, readers, critics) tell the difference between sci-fi and fantasy?

AAM: For sci-fi some Arabic authors have dedicated themselves to write in this field, like Nihad Sharif and Nabil Farouk, but fantasy itself is a new genre here in Egypt. We have a great heritage of mythology and fairytales like The Thousand and One Night and the epic romances like Sayf ibn Dhī Yazan and others but Egyptian and Arabic authors have not tried to write a modern fantasy until they saw Lord of the Rings and Harry Potter. Now we have some fantasy novels but most of them I consider fan fiction except for two novels, The Tales of The Last Red Ghoul by Mohammed Al-Dawakhly, and The Dreams Maker by Moataz Hassanein, but I hope we will see more great fantasy novels in the near future. Most of the critics can’t differentiate between fantasy and SF and consider every imaginative work a Sci-Fi work, but there is a new generation of young critics who have grown up watching and reading fantasy works and they do a better job in reviewing such works.

EEA: Are things different elsewhere in the Arab world? The publisher you worked with in the Emirates – (I forgot their name) – did you feel the ‘market’ (readership) was different there?

AAM: The Gulf countries are more interested now in young-adult literature and fantasy and particularly fantasy and one of the reasons the emirates publisher Kalimat is interested in my novel “The Abandon Mirror” is the fact that it’s a fantasy novel. I think the Emirates and the Gulf countries will explore the fantasy field more than any other Arab country, and we will see that soon.

AAM: I guess all fiction can be ‘borderline’ like the mixing of SF and horror in weird fiction like “The Great God Pan” by Arthur Machen, or the mix of SF and fantasy in the I Cthulhu mythos by H.P. Lovecraft. I don’t mind the mix and I see that it brings new things to the table.

EEA: Are there subgenres of science fiction that are known here in Egypt, such as Cyberpunk? Is there an Egyptian William Gibson or Max Headroom?

AAM: There is not much SF writers in Egypt so those sub-genres are not well known, but movies with wars in space are very popular here in Egypt like “Star Wars” but there is no Egyptian SF movies.

EEA: Why would you say that Egyptians prefer ‘realism’ in literature and works of drama (TV, cinema)? And if they like realism so much, why do they also like watching Musicals (Fred Astaire, Gene Kelly) and Egyptian fantasy series like a Thousand and One Nights? Nothing realistic about those!

AAM: The “people” love imaginative fiction, and fairytales and epics have always been part of Egyptian folklore, but the problem are the critics who consider any fiction work as “not real literature” maybe because of the totalitarian approach of the government had after the Coup of July 1952, and totalitarians are against imaginative fiction like we see is Russia and China. However, in Gulf countries, they have begun to look at SF and Fantasy as real literature and give prizes to such works like Ajwan by Noura Noman witch won the Etisalat Prize (2013) and I hope for more in the future.

EEA: How do you write? Where do you get your ‘inspiration’ from? How did you dream up your first novel? Do you plan-out a novel beforehand, or do you let your characters and plotlines ‘evolve’ naturally?

AAM: I used to write on paper but now I write on my computer. My inspiration comes from reading novels, watching movies and playing video games, other times it comes from a weird dream or nightmare. I wrote my first novel when I was 12 years old and it was a naïve try to mimic Nabil Farouq. Usually I don’t plan much, I just have the main character and some details when I start writing, then the characters and the world evolve naturally; I like to say that my characters are writing their own story.

EEA: What kind of ‘issues’ (themes) do you tackle in your work? Do you think a writer, even of fantasy, has a ‘responsibility’ towards big issues in his society today? Or is a fantasy an escape?

AAM: For me I like to read both; sometimes I read fantasy to escape the real world, but other times I read fantasy to see the world from a different angle. Nevertheless, I think writers should always try to add something new to the mix, not more of the same. There are many writers who try to copy Tolkien’s success or Harry Potter success by writing the same plot. I see that the responsibility of the writer is to give us something new in the Fantasy or SF fields.

EEA: Do you think the government should support sci-fi and fantasy? What steps would you advise in this regard? Can translation play a role? Can literary critics play a role?

AAM: We need real prizes for the SF and Fantasy like “Hugo and Nebula” in the West to encourage the youth to write in those fields, also translating their works into English to be known worldwide.

EEA: how would you explain – from talking to readers, writers, publishers – the sudden ‘explosion’ of horror literature in the bookshops and on the streets here in Egypt? Is this a marketing phenomenon or are people genuinely attracted this kind of thing? And if so who and why; age groups, gender (boys, girls) and does the ‘Arab Spring’ have anything to do with it?!

AAM: I guess after the success of Lord of The Rings and Harry Potter series the publishers saw that imaginative works are demanded in the market, so publishers like Nahdet Masr began publishing SF and Fantasy novels like ‘Ajwan’ and ‘dreams maker صانع الاحلام’ . The horror explosion is because of Ahmed Khalid Tawfeek and his series “Ma Waraa Al Tabiaa” or “The paranormal’ because Dr. Ahmed is so popular among the youth and a lot of the new writers were once his young readers, so they mimic his style and his ideas. The Arab Spring the turning into Fall had two effects, either the youth participating more in politics trying to change the real world, or making them want to escape reality in works of fiction.