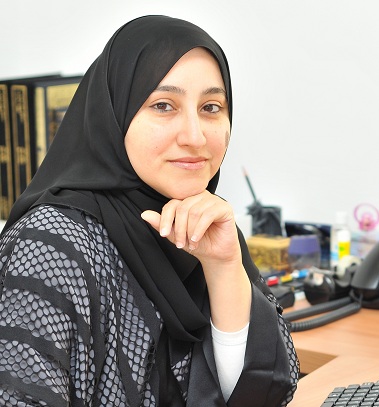 Background: Noura Al Noman is an Emirati writer from Sharjah. She studied English literature at the UAE University and got Masters in Translation in 2004 from the American University in Sharjah. Previous to her current foray into Science Fiction she has written children’s books in the past. Ajwan is her first science fiction novel and will be launched on the second day of the Sharjah International Book Fair November 8th, 2012. It is being published by Nahdet Misr, the Egyptian Publishers who have translated The Lord of the Rings, Harry Potter and Spiderwick Chronicles. Ajwan is about a 19-year-old girl on a journey of empowerment, who comes from a “water planet” and has the ability to breathe both air and water. When her infant son gets kidnapped she has to find a way to save him while maintaining a sense of balance between peace and violence.

M. Aurangzeb Ahmad: Can you tell us about your background?
Noura Al Noman: Since childhood, I fell in love with American TV and English novels, therefore I decided to major in English Literature in 1982 at the UAEU. After graduation in 86, I went into what was at the time, the most logical/convenient profession an Emirati woman would get into, teaching. I taught English to junior high till 91. Became a stay at home mom for around two years and then decided to get into something a bit different. I joined the Censorship dept at the Ministry of Information, and got paid to read books all day. During this time, I also took a legal translation test at the Ministry of Justice, and upon passing, acquired a license to open a legal translation office some time in the mid 90s. I was owner and translator, and again I had the opportunity to read and translate all kinds of texts (not only legal). After the birth of my fourth child, i closed down the office but continued to translate freelance. I also quit my job at the Mins of Info as I needed to stay at home. In the meantime, I did volunteer work till 2001 when I was hired as Assistant Manager of the Sharjah Ladies Club, where I had been a volunteer for 7 years. In 2004, I finally got my Masters in Translation from the American University in Sharjah.

M. Aurangzeb Ahmad: What motivated you to start writing?
Noura Al Noman: I’ve always written things: mostly articles or reviews of movies, which were printed in local magazines. In 2010, Sheikha Bodour Al Qasimi, owner of an Emirati publishing house called Kalimat told me that she felt I could write for kids. I disagreed with her; but the thought lingered. I did try to write about something which was close to my heart – pets. When I was a child, my cousin had a beautiful kitten and I never had a cat before. When my kids grew up we finally acquired cats, and frankly only a cat owner can understand what moved me to write about them. I felt that kids needed to read about pets in the UAE and to appreciate them and care for them. When I sent the text to Sheikha Bodour, she felt that it was appropriate for 3-5 year olds and turned it into a picture book with a textured cover. My second book was also born out of a personal experience with a hedgehog. However, the book which changed it all for me was created for my four teenage daughters, and other young adults in the Arab world. My kids, like me, fell in love with books, English books to be precise. And when I looked for Arabic YA books, I found a handful, and none worth the effort of having to negotiate, bribe or intimidate my kids into reading. It was a lost cause. And I was left dejected by the fact that my kids would not read Arabic. So I decided to write, and since my favorite books as a YA were sci fi, I wrote what I knew, and fervently hoped that it was enough to get YA interested in reading Arabic.

M. Aurangzeb Ahmad: What kind of themes inform your work?
Noura Al Noman: Well it’s only 2 toddler books about the contrast between domesticated animals and wild animals. And now “Ajwan” which is obviously about a young woman struggling to survive in a huge universe with little to no help. Because it is for YA and it’s in Arabic, I needed for it to be an intense adventure that gripped the reader from the very beginning. I also needed for it not to be too technical as that could put off new readers to this new genre. And finally, because the Arab world had undergone a series of upheavals since 9/11, I needed to reflect that in this book; but not to be a lecture-y kind of book. I love science, I love logic; but also adventure. And since adventures always involve death and destruction, I needed to soften it with a heretofore marginalized “super ability” – Empathy. That’s what Ajwan is about.

M. Aurangzeb Ahmad: Do you think that there is a general lack of interest in the Arab world?
Noura Al Noman: In books, yes; but not among the younger generation. You see them at movie theaters, hungry for the next sci fi flick – which always happens to be in English of course. So, they are interested in SF; but they don’t find it in books. Those who read English find it easy enough. I believe we can not only turn this around through creating interesting SF worlds in Arabic; but we can also turn it around for a more scientifically oriented generation interested in studying science and majoring in research and development to turn ideas/dreams/SF into reality.

M. Aurangzeb Ahmad: Where do you see Science Fiction in Arabic going in the next few years?
Noura Al Noman: From the little I have seen (and it is very little in Arabic, as you know), it seems to be stuck on Earth for some strange reason. It also seems to be stuck in Arab themes, and I am not sure again why that is. If we are going to dream, why don’t we dream big? I am – hopefully – breaking away from Earth’s gravity, from our own solar system, from even our own species, and it has not been difficult for me. I see at least one person doing the same in 21 other countries if they see someone else doing it. I hope Ajwan contributes in encouraging others to dream bigger and go where no Arab wo/man had gone before. After all there are no rules in Sf, except for the ones you make for yourself – how much easier it is to write in that world than in our own limited world? And we don’t need to employ SF to “fix” or “solve” our issues – leave that to the intellectuals and the sociologists and politicians – ours are the stars, and others will follow.

M. Aurangzeb Ahmad: What role do you think can Science Fiction play in shaping the worldviews of readers? In this respect is Science Fiction fundamentally different from other genres of literature?
Noura Al Noman: I cannot speak for other genres; but I can speak from my experience reading SF. SF has given me a different perspective about a lot of things. Perhaps it’s the capacity of SF to portray practically any concept, experience and emotion which may be harder to do in other genres. When you create worlds and universes, the sky is the limit, and through that kind of diversity, I’d like to believe that I learned tolerance and empathy. If that was the effect it had on me, it must be widespread and that is such a wonderful effect which can and should bring people closer. If mega cities of the future (on this planet and others to be colonized) are composed of people who have become one nation, and if SF seems to be able to give mostly accurate predictions, then people should look at themselves as one nation and work towards building bridges now rather than later.

M. Aurangzeb Ahmad: What are your favorite Science Fiction authors?
Noura Al-Noman: Arthur C. Clarke, Alan Dean Foster, Anne McCaffrey (who named one of the Pern ships “The Bahrain” making my head spin with possibilities), Timothy Zahn, Tad Williams, C J Cherryh, Frank Herbert. I stopped reading SF about a decade ago; but now I am back to reading again.

M. Aurangzeb Ahmad: Is there any stigma associated with certain demographics e.g, women, various ethnic groups etc publishing in Science Fiction genre in the Arab world?
Noura Al Noman: There’s hardly any SF in the Arab World – in fact, until only recently, I actually believed there was none, till I heard about novellas and short stories by a few authors like Ahmed Khalid Towfiq and a handful of others. Frankly, writing SF in Arabic is quite challenging specifically because there is so little out there and the terminology has therefore not been standardized yet. I don’t know if there is a stigma, especially in the past decade or so where there’s been an increase in SF film popularity. I think Arabs would find it strange that a woman is writing SF – an Emirati woman writing SF is even stranger. What would a woman in an abaya know about science, creating worlds filled with aliens and building action filled plots?

And then there are the publishing houses which probably associate SF with male authors – if they even acknowledge such a genre is acceptable and worth spending money on to publish. I have been extremely fortunate with Nahdet Misr for their willingness to read my manuscript and then for choosing it to be published.

You have spoken about diversity, the Gulf is one such place in the Middle East where one sees people from many nationalities and ethnicities coming together and many of the construction projects in the Emirates seem to be straight out of a sci-fi story. What other motifs from the Gulf are symbolic its sci-fiesque setting?
Noura Al Noman: In answer to the question: Like you said, the diversity in the UAE is almost like a science fiction story, where the world has become one large nation with so many ethnicities and faiths all interacting and living side by side without violence or hatred. Other sci fi aspects which can be seen here range from R&D adopted by the government in the fields of renewable energy, as well as environmental projects. Already, they’re working on nuclear power and beyond, and green cities which they hope will be just the beginning to lead the way towards more environmentally friendly human cities not only here but also elsewhere. It’s possible that the R&D taking place in the UAE will pave the way to creating the right kind of balance for human colonies on other planets.