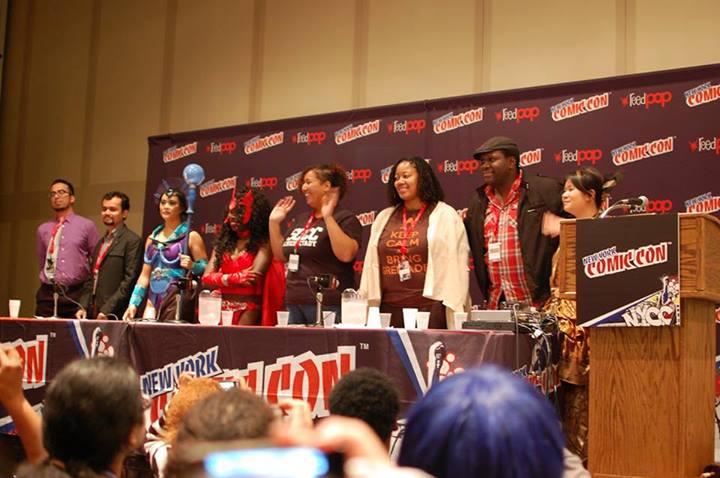 The Minorities in Fandom Panel at the New York Comic Con was a huge success. We had a house full and in fact the number of audience members that were allowed in the room because of capacity issues capped out ten minutes before the panel evan began. The other panelists were award-winning writer N.K. Jemisin, critic Jeffrey L. Wilson, Emmanuel Ortiz of Nerd Caliber, Science Fiction writer and Musician Muse en Lystrala, cosplayers, cosplayer Ger Tysk, cosplayer Jay Justice and our wonderful moderator Diana Pho who runs the Beyond Victoriana multicultural steampunk website. The panelists as well as the audience represented a diverse group of people and also a good demonstration of how people of different backgrounds can stand in solidarity with one another.

The issues that came up during the discussion ranged from representation of minorities in Science Fiction and Fantasy to people of color looking out for one another instead of just their own groups. Representations of minorities in these genres has certainly improved but we still have a long way to go and this improvement should not lull us into a false sense of security. There was also the recognition that minorities need to reach out to one another instead of restricting themselves to dialoging with the dominant group. There will always be people who will not be accepting but that should not deter a person from doing what they are doing.

The event was covered by the PC Magazine as well as the well known Science Fiction and Fantasy Publisher Tor on their website. Like the other panelists and the attendees I also wished that the time allocated to the panel should have been longer. Last and certainly not the least a huge thank and applause to Diana Pho of Beyond Victoriana – Multicultural Steampunk.