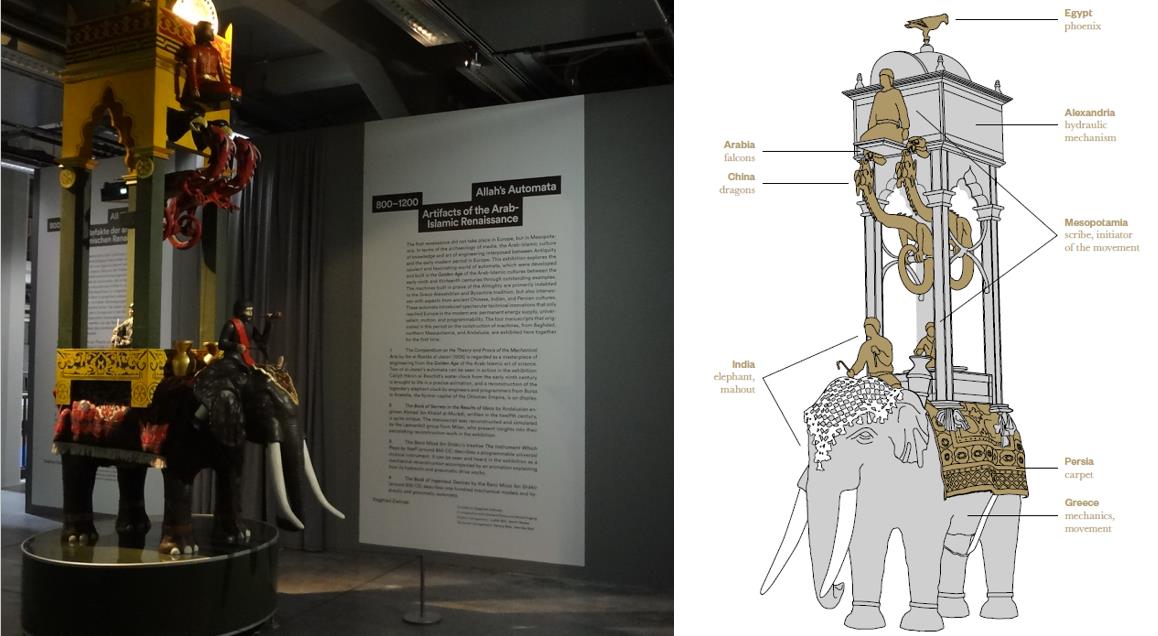 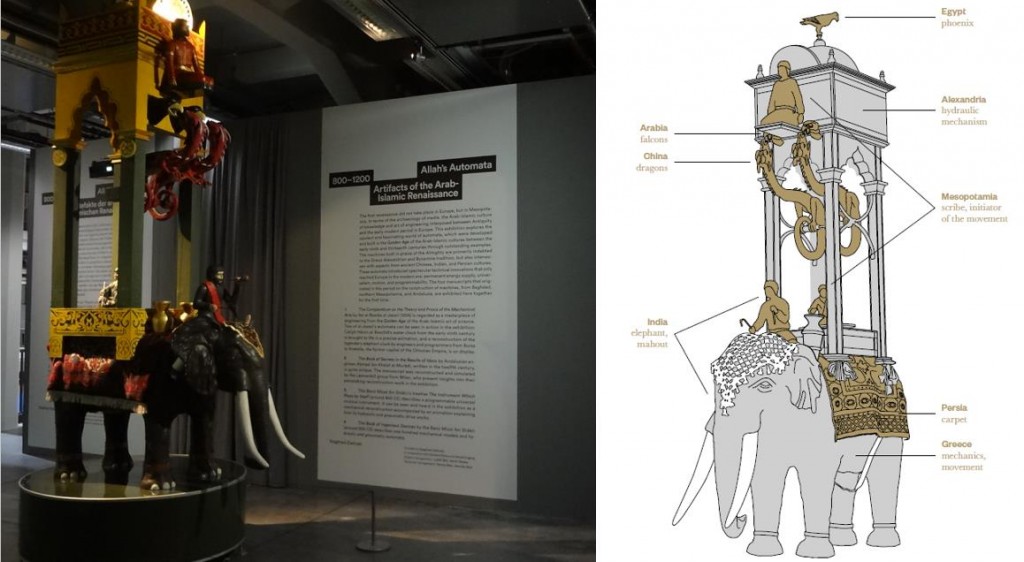 This could also be the title of a Muslim Steampunk novel but the ‘Allah’s Automata’ but it was the title of an Exhibition organized by Ayhan Aytes and George Saliba which explored the clockwork automata from the Golden Age of Islam. I met Ayhan a few years ago when he came to the University of Minnesota to deliver a lecture of Al-Jazarri’s clockwork elephant. It is great to see his work again.

The first Renaissance did not take place in Europe, but in Mesopotamia. Arabic-Islamic culture functioned – from a media-archaeological point of view – as a mediator between classical antiquity and the early Modern age in Europe. As part of the exhibiton Exo-Evolution and on the basis of outstanding examples, the exhibition explores the rich and fascinating world of the automata that were developed and built during the golden age of the Arabic-Islamic cultures, the period from the early 9th to the 13th century.

The machines to glorify God Almighty draw mainly on the traditions of Greek Alexandria and Byzantium. They introduced spectacular innovations, which did not emerge in Europe until the Modern era: permanent energy supply, universalism, and programmability. For the first time, four of the master manuscripts of automata construction from Baghdad, Northern Mesopotamia, and Andalusia are on show together: the al-Jāmic bayn al-cilm wa-’l-camal an-nāfic fī ṣinācat al-ḥiyal [Kompendium on the Theory and Practice of the Mechanical Arts] by Ibn al-Razzāz al-Jazarī (1206 CE), the Kitāb al-asrār fī natāʾij al-afkār [The Book of Secrets in the Results of Ideas] by the Andalusian engineer Aḥmad ibn Khalaf al-Murādī, the Kitāb al-ḥiyal [Book of Ingenious Devices] (about 830 CE) by the Banū Mūsā ibn Shākir and the treatise al-Āla allatī tuzammir bi-nafsihā [The Instrument Which Plays by Itself] (850 CE), a masterpiece of all modern programmable music automata.

Furthermore, the exhibition shows two reconstructions of legendary artifacts: Al-Jazarī’s masterpiece among his audiovisual automata, the so-called Elephant Clock – a spectacular object for hearing and seeing time –, and the programmable music automaton by the Banū Mūsā as a functioning mechatronic model.