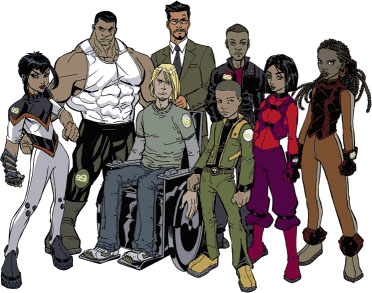 The 99 is a comic book series aimed at a Muslim audience. The idea is that there are 99 Muslim superheros each of whose superpowers reflect the attributes of God. Here is an article from the New York Times that describes the comic.

Comics to Battle for Truth, Justice and the Islamic Way
Published in The New York Times, 22 January 2006
Hassan M. Fattah

DUBAI, United Arab Emirates, Jan. 21 – For comic book readers in Arab countries, the world often looks like this: superheroes save American cities, battle beasts in Tokyo and even on occasion solve crimes in the French countryside. But few care about saving the Arab world.

If Naif al-Mutawa has his way, that is about to change. Young Arabs will soon be poring over a new group – and new genre – of superheroes like Jabbar, Mumita and Ramzi Razem, all aimed specifically at young Muslim readers and focusing on Muslim virtues.

Mr. Mutawa’s Teshkeel Media, based in Kuwait, says that in September it will begin publishing “The 99,” a series of comic books based on superhero characters who battle injustice and fight evil, with each character personifying one of the 99 qualities that Muslims believe God embodies.

A burly, fast-talking Kuwaiti with a dry wit, Mr. Mutawa, 34, said existing superheroes fell into two main genres: the Judeo-Christian archetype of individuals with enormous power who are often disguised or outcasts, like Superman, and the Japanese archetype of small characters who rely on each other to become powerful, like Pokemon.

His superhero characters will be based on an Islamic archetype: by combining individual Muslim virtues – everything from wisdom to generosity – they build collective power that is ultimately an expression of the divine.

“Muslims believe that power is ultimately God, and God has 99 key attributes,” Mr. Mutawa said. “Those attributes, if they all come together in one place, essentially become the unity of God.” He stresses that only God has them all, however, and 30 of the traits deemed uniquely divine will not be embodied by his characters.

Still, this is tricky territory. Muslim religious authorities reject attempts to personify the powers of God or combine the word of God in the Koran with new myths or imaginative renderings more typical of the West.

But Mr. Mutawa is seeking to reach youngsters who are straddling the cultural divide between East and West. They like comics and Western entertainment, and yet are attached to their roots and intend to hold on to their customs. He, too, faced that divide, going to summer camp in New Hampshire in the 1980’s – he says his parents wanted him to lose weight – while grappling with Arab culture and pressures.

In his flowing white robe and traditional Arab headdress, Mr. Mutawa looks every bit the Kuwaiti; when he opens his mouth, however, he is every bit the New Yorker who spent his formative years reading comics and much of his adult life in the United States, training as a psychologist at Bellevue Hospital Center and writing a series of children’s books on assimilation, race and prejudice.

“I was the kid that was thrown out of class for not being willing to accept what the teacher was teaching us about Jews,” he said. “I had Jewish friends at camp, and I knew that they were not the stereotype.” With three boys and a fourth child due soon, Mr. Mutawa says he wants his children to be able to find a balance between East and West.

Others, too, have seized on the opportunity for comics in the Middle East but not graphic representations of the principles of the Koran. In Cairo, AK Comics has published Middle East Heroes, four larger-than-life Arab characters who face the challenges of most Arabs by day and fight for them by night.

Mr. Mutawa, an avid reader of “Archie” and other comics, who has a Ph.D. in clinical psychology and an M.B.A. from Columbia University, dreamed up his Muslim superheroes during a taxi ride in 2003 with his sister, Samar, in London.

The plot of the series, drawing on stories and history familiar to most Muslim youths, involves the great wisdom and learning that characterized the Muslim world at its apogee, when it reached from northern Pakistan to southern Spain in the late Middle Ages.

The story concerns 99 gems encoded with the wisdom of Baghdad just as the Mongols are invading the city in the 13th century – in his version, to destroy the city’s knowledge. The gems are the source of not only wisdom but power, and they have been scattered across the world, sending some 20 superheroes (at least in the first year, leaving another 49 potential heroes for future editions) on a quest to find them before an evil villain does.

“To create the new, you have to tap into the old,” Mr. Mutawa says of the deep historic connections in the comic. “The real goal is to teach kids that there’s more than one way to solve a problem.”

The characters in “The 99” are not all Arabs, but Muslims from all over the world. Jabbar, the enforcer, is a hulking figure from Saudi Arabia with the power to grow immense at a sneer; Mumita is a bombshell from Portugal with unparalleled agility and a degree of bloodlust; and Noora, from the United Arab Emirates, can read the truth in what people say and help them to see the truth in themselves. There is even a character who wears a burka, aptly called Batina, derived from the word meaning hidden.

But that is where religion stops and mythology begins, Mr. Mutawa says. “I don’t expect Islamists to like my idea, and I don’t want the ultraliberals to like it either,” he says. So far, he has managed to get Kuwait’s censors to approve the early mock-ups, he says. But to keep the orthodox at ease, he has included women in headscarves and plays it by the book as far as religion goes.

But what may give him the biggest edge is a seasoned team, including writers like Fabian Nicieza, who wrote for X-Men and Power Rangers comics, and a group of managers and advisers who are old hands in the industry.

In addition, “The 99” will piggyback on a distribution network Mr. Mutawa is setting up for a parallel project, publishing all manner of other comics in the region. Teshkeel has signed on with Marvel Comics to translate and distribute their comics in the Middle East, and will soon begin publishing Arabic versions of Marvel’s Spider-Man, Incredible Hulk, X-Men and others. He said he is in talks with Archie and DC Comics for similar deals. He says that Teshkeel has attracted $7 million from investors, based on the promise that he will turn his company into the largest comics publisher in the Middle East.

Last year, Teshkeel also bought Cracked, a defunct competitor of Mad magazine, which he plans to resume publishing in February pitched to a more mature audience in the United States. He hopes those publications will encourage other media companies to take him more seriously and back his Muslim superheroes concept.

“We got a sense that he was serious about this, and that it wasn’t something he was pursuing on a whim,” says Bruno Maglione, president of Marvel International, which signed a licensing agreement with Teshkeel last October.

English-language comics, though, are a tough sell in the Middle East; they are typically sold in specialty bookshops, and their distribution is spotty. So almost all of Teshkeel’s will be in Arabic, with the expectation that they will be carried in supermarkets and newspaper stands.

Teshkeel will also have to compete against magazines like Space Toon Town, a monthly children’s comic, as well as AK Comics.

The religious dimension is the biggest risk for a product whose main market, like all new products in the region, is oil-rich Saudi Arabia, where religion and entertainment rarely mix. Mr. Mutawa has already witnessed the frustration of having a book banned. “Get Your Ties Out of Your Eyes,” a children’s book featuring Bouncy, a ball who wears a tie – but differently than others – was banned in Kuwait because it seemed to be commenting on the Koran.

“When you’re in a place where Bouncy Book 3 doesn’t pass the censors, you have to be very creative,” he said.

AK Comics’ titles include figures like Aya, a Princess of Darkness; Zein, a time-traveling pharaoh; Jalila, an ancient Arabian swordsman who protects the City of All Faiths, and Rakan, a lone warrior entrusted with fighting evil. The characters must help bring order after 55 years of war between two unnamed superpowers, with political undertones running throughout. Unlike Teshkeel, AK’s comic books have no mention of religion, based on a company policy that “no religion or faith be perceived as better than another.”

Mr. Mutawa says he is taking a riskier path because he wants Muslim youngsters to have role models that fit both their Arab and Western sides. Last summer, his eldest son attended the same summer camp in New Hampshire – Robin Hood – and returned with a new discovery: Archie.

“I want my kids not to have to face the dichotomy all the time,” Mr. Mutawa said. “I see this as a way to compete with hate.”