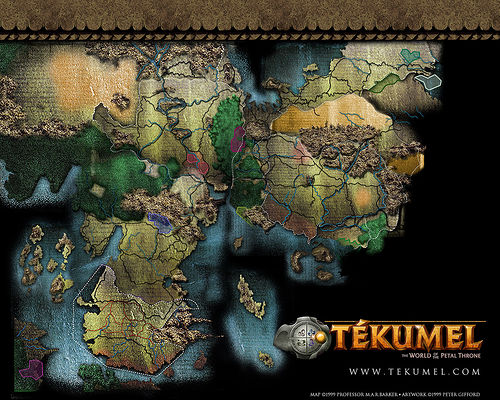 Here is a description of Tékumel from Wikipedia.

Tékumel: Empire of the Petal Throne is a fantasy world created by Professor Muhammad Abd-el-Rahman Barker over the course of several decades. In this imaginary world, huge empires with medieval levels of technology vie for control using magic, large standing armies, and ancient technological devices. Professor Barker, like the better-known J.R.R. Tolkien, initially approached the building of his fantasy world as a linguistic exercise. In other words, the setting provided a context for Barker’s constructed languages.

The most significant language created by Barker for his setting is Tsolyáni, which resembles Urdu, Pushti and Mayan. Tsolyáni has had grammatical guides, dictionaries, and even a complete language course developed for it. In order for his imaginary languages to have this type of depth, Barker developed entire cultures, histories, dress fashions, architectural styles, weapons, armor, tactical styles, legal codes, demographics and more, inspired by Indian, Middle Eastern, Egyptian and Meso-American mythology in contrast to the majority of such fantasy settings, which draw primarily on European mythologies.

Also check out the official website for more information. http://www.tekumel.com/