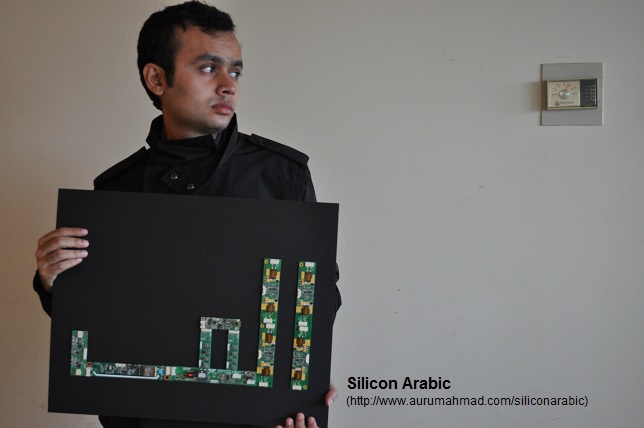 I usually do not post about my projects but this one is relevant to the theme of the site so here it is. I will let the project speak for itself. Here is a relevant excerpt from the site:

Silicon Arabic combines the aesthetics of the traditional and ancient Islamic Art of Calligraphy with a modern medium – Silicon circuit boards.I have been practicing Arabic Calligraphy for more than a decade now and Chinese calligraphy for the last three years and I have had the idea of Silicon Arabic for the last three years at least but it is only now that I have had the chance to execute this idea. I also work as a Scientist and so this was a perfect opportunity for me to combine two different area of my interest. The art of calligraphy has been an endemic part of Islamicate cultures for more than a thousand years. Although it was primarily developed by Muslims it is not limited to people of Muslim background with people of the Christian faith and other local religions practicing this art form. The idea of using circuit boards to create Arabic calligraphy is thus a new way to express this ancient art form.