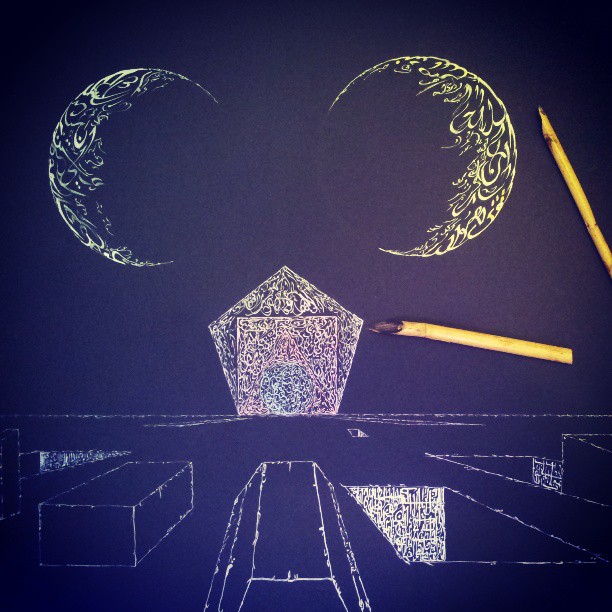 Razwan Ul-Haq is a British Muslim artist with a wide range of artistic styles. His work can be described as The experiential Islamic Art … is a post-modern reflection, that draws from the well that fed the traditional calligraphic foundations of Islamic Art. Razwan uses a number of Science Fiction motifs in his work.

Here is a the description of the art piece given below by the artist himself.

After zikr and reflecting on the mathematics of creation, I felt compelled to put it in calligraphy.  Four shapes frame the Calligraphies of the Divine Names.  The triangle has the Name Al Khaliq,  the Creator.  The inner circle is composed of the Name Al Badee, the Pioneer.  Whilst the square is brimming with the Name Al Bari, the Maker.  Finally, the pentagon contains the Name Al Mussawir, The Artist.  The moons are composed of Surah Ikhlas, reflecting Universal Tauheed (Oneness).”

Here is another Science Fiction piece that combines Islamic Iconography and Science Fiction, in this case the time hopping time machine TARDIS from Dr. Who.

According to Razwan Ul-Haq, the piece below is a “cosmological interpretation” of a chapter of the Qur’an, Surah Al Mulk, The Dominion.   Why Science Fiction? Razwan Ul-Haq tells us, “As psychologist Jung explained, the unconscious mind has its own connection to the Universal. You see, Jung observed that, whatever people may believe, their own unconscious has already got its own inbuilt tendency of looking at things.  What we say we believe during the day is not what our inner subconscious actually knows to be true.   At night in dreams, the reality of what our inner self knows comes out.  And that’s why dreams and certain fictional creations like Science Fiction & Fantasy helps us to see things that we normally don’t.  Time machines and imagination of space and movement send the mind racing to another dimension. Cosmologically speaking, the Qur’an speaks of Earth as a temporary plane of existence.  There are other worlds in the Qur’an.” 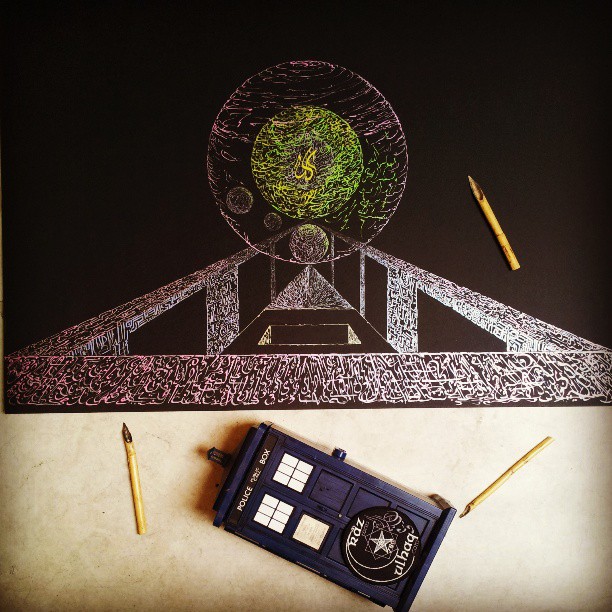 Additionally Razwan is also the author of Sultan vs. Dracula which is a more historically accurate take on the conflict between Dracula and the Ottoman Empire.