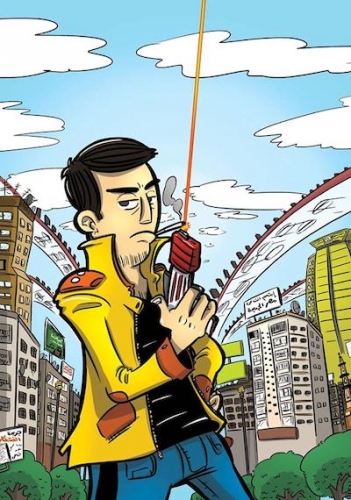 Sherif Adel’s Foot 3aleyna Bokra (Pass By Tomorrow) is an Egyptian comic set 1000 years in the future where technology has progressed but the problems that the Egyptian people face on a daily basis remain more or less the same. Here is an except from an interview of the author done by Your Middle East.

AL: Why the history of the future? For camp/humor value? Just because it’s more fun? Because you’re freer to comment on anything you like: past, present, future?

SA: “Where is Egypt heading to?” is a question that we have been asking ourselves over and over during the past few years and – in my experience at least – we’ve been slowly realising that nothing major is actually changing. Corruption, misbehaviour, harassment, bad traffic, political indifference, and pretty much everything is settling back into place. So Pass By Tomorrow is my answer to an extension of that question, “How will Egypt be like in 1,000 years?” In my opinion, it will also be about the same. Our chaotic foolish half-assed way of dealing with our problems and the world will prevail. On the bright side, we get a lot of surreal comedy on a day-to-day basis; so there’s always that.

AL: What are your inspirations?

SA: Inspirations… I consider myself an avid consumer of fiction in many of its forms; I’m specifically enthusiastic about comics, video games and cartoons. For Pass By Tomorrow, I would say my biggest inspiration is “ملف المستقبل – The Future File” by Dr. Nabil Farouk. They are science fiction novellas that were insanely popular in the Nineties, and I’d go as far to say they introduced a whole generation (myself included) to science fiction and to the hobby of reading itself.

Pass By Tomorrow started out in my mind as a strict parody to ملف المستقبل, the latter was a optimistic imagination of the future where Egypt is a world leading country built on science and ethics with an intelligence team that saved the planet more times than you can count on one hand; while the former is a realistic (and thus satirical) imagination of the future where things are… as I said pretty much the same as they are now. As I went along with writing the script of Pass By Tomorrow it departed from being a parody towards being it’s own thing; there are still nods here and there to ملف المستقبل, but yeah I wouldn’t consider it just a parody anymore.

For more information check out the website at this URL