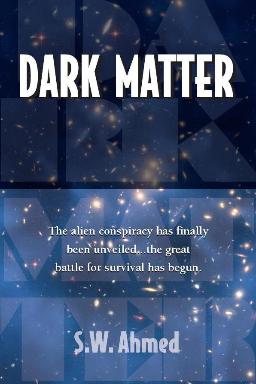 Dark Matter is an epic Science Fiction novel by a Bangladeshi-American author Dark Matter which portrays  diverse aliens, delves into a solution of the Fermi-Paradox and an all round adventure. Here is the description of the book from the official website:

Dark matter, the invisible substance that constitutes the bulk of all matter in the universe, remains one of science’s greatest mysteries. But what if it actually is nothing more than ordinary matter purposely hidden from our view? What if we are only allowed to see a small fraction of the stars in our galaxy, because the vast majority of star systems are teeming with aliens who wish to remain unseen?

Marc Zemin, a brilliant student of astrophysics, is the first human to ever stumble upon this startling secret, when his experiments with wormhole travel cause aliens to land on Earth and whisk him away into space. To his astonishment, the aliens want his help in fighting a colossal galactic war that is rapidly spiraling out of control. But as he struggles to survive from battle to battle across the farthest reaches of the galaxy, he begins to uncover a horrifying conspiracy at play, striving to keep the warring civilizations in continuous conflict with each other. A desperate race against time ensues, as he and a handful of newfound alien friends try to stop the war and confront this mysterious, powerful force bent on destroying all life in the galaxy. But any hope of their success surprisingly appears to hinge on just one thing – whether or not Marc has the strength to overcome his own demons and face the shattering truth about who he really is.