Review: Throne of the Crescent Moon by Saladin Ahmed

By: Sofia Samatar
In: News, Reviews, SF by Muslims
With: 2 Comments 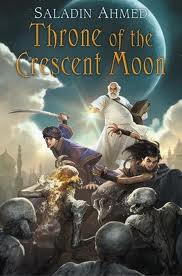 The first blurb on the back of Saladin Ahmed’s debut novel, Throne of the Crescent Moon, comes from Nebula winner Walter Jon Williams. Williams writes: “Readers yearning for the adventures of Fafhrd and the Gray Mouser will delight in the arrival of Adoulla and Raseed.”

The comparison accurately places Throne in the genre of adventure fantasy, and specifically in the sword-and-sorcery subgenre of Fritz Leiber’s famous duo, who first appeared in the pulp magazines of the 1930s. Adoulla and Raseed, like Fafhrd and the Gray Mouser, are fighting partners with little in common beyond a determination to combat evil: Adoulla the ghul-hunter is sloppy, pleasure-loving, irreverent and old, while the dervish Raseed is stern, single-minded, scrupulously devout, and young. These differences make for a lot of entertaining bickering between the two, but they also mean that the heroes complement each other. Adoulla’s spells combined with Raseed’s forked sword pose a formidable threat to all who would disturb the peace and safety of the Crescent Moon Kingdoms.

However, these heroes also need help. The novel teems with colorful characters, from the shape-shifting nomad Zamia Banu Laith Badawi, to the dangerous leader of a band of thieves known as the Falcon Prince. These very different individuals join forces with Adoulla and Raseed against a ghul-maker strengthened by ancient and malignant magic. To destroy him and save the Kingdoms, they must avoid distractions: grief for dead kin, guilt over those they’ve slain, and the complications of love. Adoulla, Raseed and Zamia all find their deepest commitments—to guild, religious order or clan—tested in the process.

This is bold, rip-roaring stuff: the kind of story that demands the vivid, high-contrast color of the pulp magazines that are its direct forbears. The cover art, with its grim-faced heroes and half-incinerated ghuls, evokes that ethos. So does Ahmed’s prose, which ranges from the mildly baroque—“When he was outside of Dhamsawaat, stalking bone ghuls through cobwebbed catacombs or sand ghuls across dusty plains, he often had to settle for chewing sweet-tea root”—to the ker-pow: “A crossbow bolt! Men and women screamed.”

What Throne of the Crescent Moon offers, then, is a decidedly old-school pleasure. Here be secret scrolls, ancient curses and various types of undead. Yet the book is also emphatically contemporary, especially in the way it deals with age and gender. Adoulla, the old man, is the main character, not a Gandalf who pops in and out of the tale to guide and advise the real, youthful subjects. He even gets a love story. And his love interest, the courtesan Miri, is a sensible, realistically portrayed, and erotically powerful woman of his own age. These mature heroes are so compelling that they threaten to eclipse the less complex Raseed and Zamia—but hey, that’s the privilege of the old. Adoulla and Miri have a long history together, and their difficult, charged relationship allows them to steal the show.

Zamia and Miri, with the alkhemist Litaz—another vibrant, gifted older woman—form a trio of strong and highly individual female characters, something not typically associated with the sword-and-sorcery genre. For me, Ahmed’s interest in characters who fall outside the traditional young, male hero-type is what makes his book unique. His representation of a complex, religiously-based society is also welcome, but it’s his subversion of the most common definition of “hero,” within an uncompromisingly heroic fantasy story, that lets Throne of the Crescent Moon deliver something we don’t get every day: an old-school pleasure that’s not a guilty one.