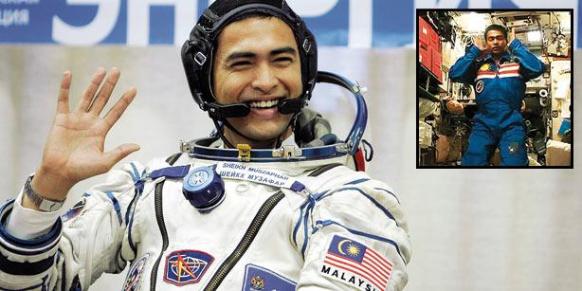 As of today’s date, nine Muslims have gone into space, no surprisingly space offers unique challenges and opportunities to Muslims in terms of performing their religious duties like daily prayers (which are connected to the rotation of the planet where they live as well as directionality of prayers on Earth) and fasting in the month of Ramadan  (which is connected to not only rotation but also the orbit of the principal satellite of Earth). While this is not Science Fiction, it does offer us interesting opportunities to exlore these themes in Science Fiction. Here is a relevant excerpt from an article on OnIslam:

While for the qiblah (direction Muslims take during prayers), JAKIM drafted it should be determined “according to the capability” of the astronaut. Meaning that if he/she were facing Mecca from the outer space during their flight in an orbit around Earth in a spacecraft like the ISS for example and the prescribed time period of salah coincided with that facing, then they can direct themselves toward Mecca directly.

But in case this coincidence ceased to exist; they can direct themselves toward the angle they believe it directs toward Mecca at best without any mistakes with their salah. That’s based on the Qur’anic verse: {And to Allah belongs the east and the west. So wherever you [might] turn, there is the Face of Allah. Indeed, Allah is all-Encompassing and Knowing.} (Surat Al-Baqarah: 2:115).