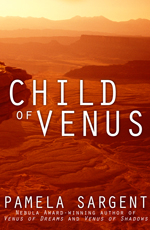 Pamela Sargent The Venus Trilogy is sometimes compared to Kim Stanley Robinson’s Mars Trilogy. Just like the Mars Trilogy the Venus Trilogy also spans many centuries and has the terraforming of that planet as the main theme of the book. In a manner similar to Robinson’s trilogy there are also Muslim character’s in Pamela’s book as well. Here is a description of the series from ereads.

Venus of Dreams introduces Iris Angharads, a determined, independent woman who has set herself one seemingly unattainable goal: to make the poison-filled atmosphere of Venus hospitable to humans. She has worked day and night to realize her dream with only one person sharing her passion, Liang Chen. It seemed impossible to make Venus, with its intolerable air and waterless environment, into a paradise, but Iris succeeds. And in doing so, she creats a powerful dynasty beginning with her first born Benzi.

In Venus of Shadows, the Venus Project calls upon the strongest and most courageous to create a prosperous world in the dismal wilderness of Venus. Those who demonstrate the skill and the passion to embark on this adventure must transform the barren planet in the midst of political and cultural unrest. When Benzi and his sister Risa find themselves in opposing forces on the battlefield, their love and perseverance will determine the destiny of the new land.

In Child of Venus the terraforming has been going on for centuries. It will be many more years before the planet’s surface has been rendered fully habitable and its human settlers can leave their protective domes. But there are those who are foolishly unwilling to wait. In a colony still ravaged by the after-effects of a battle between two religious cults that divided families and created civil war, Mahala Liangharad, a true child of Venus, conceived from the genetic material of the rebels and brought to birth only after their deaths, is a beacon of hope.

Sargent builds imaginatively-detailed new worlds of breathtaking wonder and shows that however far humanity may travel it will overcome any challenge.