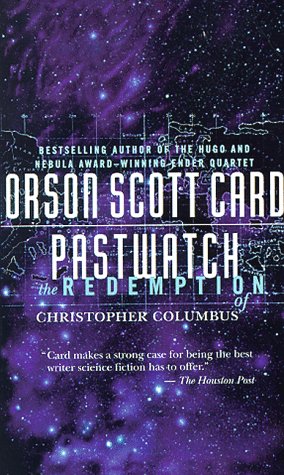 Orson Scott Card’s Pastwatch: The Redepmtion of Christopher Columbus: This is a story about alternative history/ time travel which has a few Muslim characters. Here is a review from Publishers Weekly.

Playing with the time stream isn’t new to science fiction, but Card (Ender’s Game), who’s won both a Hugo and a Nebula, gives the concept a new twist here-with mixed results. His angle is to make the temporal interference not accidental but intentional, as a group of scientists go back in time to alter Columbus’s journey. Sponsored by the organization Pastwatch, which uses a machine called TruSite II to view the past in remarkable detail, the “Columbus Project” is headed by Tagiri, whose TruSite viewing of the horrors of slavery has prompted her to revise the famed explorer’s agenda. Tagiri sends into the past her daughter, Diko, a Mayan descendent named Hunahpu and a man named Kemal, a prickly sort whose initial skepticism is transformed into a fierce commitment to change the past. Armed with devices from the future, the three return to 1492, determined to transform Columbus from a gold-seeking pirate into a proponent of world peace and global unity. Uniformly well-meaning, the trio is just too sanctified to believe, and in their hands, the complexities of temporal mechanics are boiled down to simplistic cause and effect. Some sparks are generated when the Pastwatchers finally meet Columbus, but even that encounter produces fewer surprises than you’d expect from a master like Card. Copyright 1996 Reed Business Information, Inc.

2008-09-15
Previous Post: Gregory Benford and Martin H. Greenberg’s (ed) What Might Have Been? Volume 2: Alternate Heroes
Next Post: Edward Gibbon’s The Decline and Fall of the Roman Empire