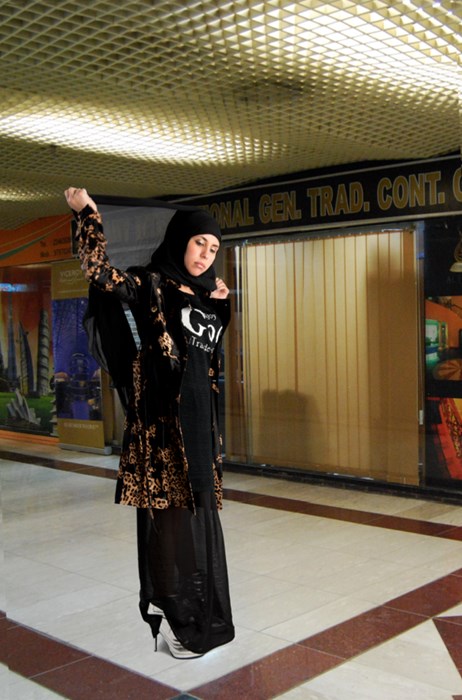 Dazed Magazine sits down with Fatima Al Qadiri and Sophia Al-Maria, Arab-Americans from teh Gulf, on their thoughts on Gulf Futurism. Here is a relevant excerpt:

The Gulf paradox – a headlong sprint into the future tempered by ultra-conservative Islamic codes – defines everyday life in the region, and continually re-emerges in the duo’s work. “It’s a very bizarre, liminal space,” Al Qadiri says, “always looking forwards but clinging desperately to the moral rules of the past.” Despite strictly conservative gender roles, forbidden subcultures flourish in the malls, such as groups of girls called “boyas” (the feminine conjugation of “boy”). “Gender-bending in the Gulf is really interesting,” Al-Maria says. “Boyas trickled down from a lifestyle to a fashion thing for young girls. They’ll wear a men’s Rolex, cologne and basketball shorts and cut their hair short underneath their abayas.” Boyas get sent to rehabilitation centres, “the same shit the Christian right does,” as Al Qadiri points out. Her art WaWa Series (again, with Al Gharaballi) uses the Gulf’s infantilised female pop-star imagery and the nonexistence of images of Arab lesbianism to create lesbian couple portraits in which Al Qadiri takes on the role of the misogynistic butch partner instead of the typically imagined female pop star.

For women, the Islamic cultural codes really come into play once they hit puberty. Protecting one’s “honour and dignity” becomes paramount, as girls don abayas and stop interacting with the opposite sex, resigned to a life at home or at the mall. The indoor life of the Gulf’s indoor life is partly an environmental necessity, due to the extreme heat; nevertheless, Al Qadiri says, matter-of-factly: “Girls are not walking the streets. Maybe I’ve seen it once in my lifetime. It’s just not safe.”

The extreme level of everyday sexual harassment in the Middle East was a strong influence on Al-Maria, who lives in Doha, Qatar. She went to university in Cairo, where “crazy shit like 10-year-old boys grabbing your crotch every day” was the norm. “When I saw the images of Tahrir (Square, during the 2011 Egyptian revolution), the first thing I thought was, ‘I’m worried about the women…’ It’s become a weird crusade.” Now she is preparing to direct her first feature film, a rape-vigilante thriller called Beretta that sees a mute lingerie-salesgirl going on “an apeshit killing spree, which is how a lot of us feel!”

In what Al Qadiri calls the Gulf’s “consumer-culture robot desert”, teenage life revolves around the mall, video games and satellite TV. Al-Maria remembers sneaking into the mejus, the men’s side of the house, once everyone was asleep, and spending long nights playing video games and watching global satellite TV. “That was a very unique Gulf experience, existing purely inside the television, the video game, then later my phone and the internet.”

Check out the full article here.

2016-05-09
Previous Post: Islam and Sci-Fi: May the 4th Edition
Next Post: The Windup Girl & Some Thoughts on Malaysia