Neil Gaiman on the Refugee Crisis in Syria 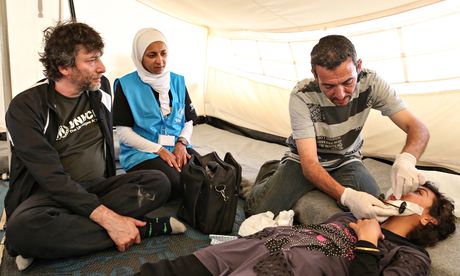 Here at Islam and Science Fiction we seldom discuss the going on in the world but the refugee crisis in Syria is one of the most important humanitarian crisis of our times. It is encouraging to see that one of the seminal science fiction authors of our time Neil Gaiman is working with UNHCR (United Nations High Commissioner for Refugees) to bring attention to this humanitarian crisis. Here is an excerpt from the Guardian article by Neil Gaiman and what he has to say about the refugee crisis:

Before I came out here, I tried to imagine what a refugee camp would be like. It would consist of several rows of tents in a field. It would be dusty, of course, because the field was in Jordan, where it is dry, and it would be a big field, because there were a lot of refugees. I had not imagined cities. Where Azraq is a ghost city of white boxes in a flint and lava desert, Zaatari is an anarchic dusty city of tents and box-like people-containers, in which every streetlight is covered with a wild spaghetti-tangle of wires, stealing electricity to light people’s homes, charge their phones and power televisions. Kilian Kleinschmidt, the UNHCR camp manager who is mayor to this “city” of 100,000, has resigned himself to an electricity bill of $500,000 a month, and now concentrates on putting in boxes on the lamp posts that allow authorised electricians to access the power safely, and urging people to raise the wire tangles up off the ground during the rains. People move house in Zaatari by putting wheels on to repurposed fenceposts, lifting their houses on to them, and hauling them through the streets, while boys jump on and off, like a fairground ride.

You can also donate to UNHCR clicking on the following image which will take you to Gaiman’s Syrian refugees page on the UNHCR website. 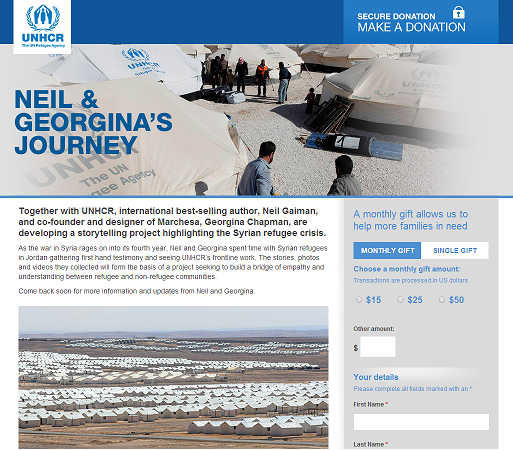