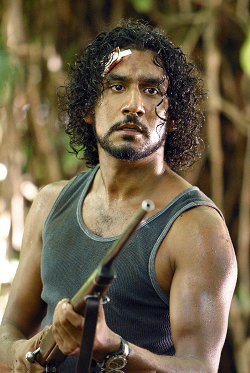 The character of Sayid Hassan Jarrah (played by Naveen Andrews) on the famous television show Lost is a Muslim. Here is some information on Islamic references in the show from the Lostpedia. (Thanks to Tyrone T. for pointing this out.)

Among the main explicit references, comes Praying (Salat), which Sayid was seen practicing on and off the Island with different mindsets. Hence, comes its importance in portraying his Faith Journey. Prior to the crash, a flashback of Sayid revealed his employment of praying as a means of approaching Essam, to fulfill the task he was blackmailed into by the CIA. His desire to claim Essam’s body to provide a proper Islamic burial delayed his flight, causing him to board the fated Flight 815. Furthermore, during his time on the Island, Sayid was seen on the Sailboat praying again, this time, however, as a means of connecting to God, to strengthen his faith and attain a spiritual support, before what could be a deadly confrontation with the Others. Another reference to praying was made, when Sayid visited Shannon’s grave, and left his praying breads at the cross, in what also seemed to be a symbol of bridging between religions. (“The Greater Good”)

Position on burials. During the events of “Walkabout”, Sayid suggested the burial of the deceased bodies from The middle section and opposed Jack’s practical decision to burn them along with the fuselage. He felt that neither he nor Jack had the right to make such a decision which may disregard the wishes and religious beliefs of the deceased.

Testimony of faith. While hanging up in Rousseau’s trap and thinking he would die, he is heard saying the Islamic testimony of Faith (Shahadah), which are the last words a Muslim says before his death, if able to. (“Solitary”)

Belief in Qadr, fate or divine destiny. One of the doctrines of Islam is Qadr, fate or divine destiny. Fate is one of the persistent themes of LOST. Although it is not certain, Sayid is most probably a Sunni. Evidence for this include the following: he is from Tikrit (per S106, House of the Rising Sun). Tikrit is part of the predominantly Sunni area of Iraq. In S109, Solitary, while he tortures a prisoner named Falah, he refers to Shiites in a manner that implies he is Sunni: “You want me to stop, Falah? . . . Your Shiite friends have already implicated you in the bombing. You planted the device in the Bathist headquarters, didn’t you?” Although Qadr is a doctrine common throughout Islam, it is emphasized in Sunni Islam as one of the six articles of belief. In S2E23, “Live Together, Die Alone”, Sayid refers to fate in a way that implies he at least partially believes in it: “On the way to the funeral I told you that Michael had been compromised by the Others, and then you asked me how we might take advantage of that. I believe fate has given us our answer — the boat.” In general, however, Sayid speaks and acts as if his words and actions can have a direct effect on events, which implies a practical belief in free will.

In Season 4, a Qur’an, the religious text of Islam, is seen on Ben’s bookshelf. (“The Economist”)