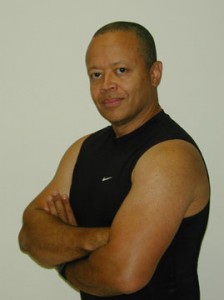 Background: Steven Barnes is a Hugo Award nominated accomplished author who has written a number of science fiction novels. His novelette The Locusts was written with Larry Niven and was nominated for the Hugo award. His Insha’Allah series which consists of the Novel’s The Lion’s Blood and Zulu Heart depicts an alternative North America colonized by Muslims from Africa. He has written episode of Stargate SG1, The Outerlimits and Andromeda. He has also written novelizations of Star Trek and Star Wars.

M. Aurangzeb: You have written for various mediums and genres, what inspired you to write an alternative history duology set in an Islamic country in North America?
Steven Barnes: I wanted to explore the nature of slavery, and to create a world in which Africa developed a technological civilization prior to Europe. To do that, I needed a unifying religion, and Islam fit the bill.

M. Aurangzeb: The world of Lion’s world has many parallels with Antebellum South, can you elaborate on the parallels and differences and why you chose that setting?
Steven Barnes: The “alternate America” scenario set the stage on this continent.  Given that, I figured that the same financial pressures (agrarian) would force some of the same adaptations.  However, slavery in my world is a mite kinder: the Irish kept their names and were allowed to keep their religions, for instance.  And I know of no instance where there was a general call for slaves to fight with the ability to earn their freedom.

M. Aurangzeb: What attracted you to Science Fiction in the first place?
Steven Barnes: It’s just the way I think!

M. Aurangzeb: What are the main themes that inform your work?
Steven Barnes: That human beings have vast potential, rarely used.

M. Aurangzeb: The Muslims in your stories are multi-faceted characters while in a lot of other literature they are presented as one-dimensional in character usually represented as the other, what role do you think fiction has in healing between people?
Steven Barnes: Thank you.  The humanity of the Muslim characters was of critical importance to me, and I would like to thank two of my advisors, Mushtaq Ali Ansari and Shaykh  Taner Ansari, for keeping me honest.  I think that fiction is the creation of a consensus dream of humanity, and as such it helps us understand how the author and the author’s culture thinks and feels.

M. Aurangzeb: You have written many novels and have even written episodes of Stargate SG1 and outer-limits and novels set in the Star Trek and the Star Wars universe, thus covering a wide range of material. Which of your works are you particularly fond of and why?
Steven Barnes: Lion’s Blood and Great Sky Woman Probably came closest to my heart, in terms of relating my inner experience to the outside world.

M. Aurangzeb: In addition to the Insh’Allah series, is there any fiction that you have written that deals with Islamicite cultures that you would like to share with our readers?
Steven Barnes: There was a limited publication of “Assassin”, a story dealing with the world of the Hashassin in 1185.  It isn’t my best work (written fast, as work for hire, originally) but still a fun story, and written with respect for the cultures involved.

M. Aurangzeb: Do you have any favorite Science Fiction author or a favorite novel that you would like to share?
Steven Barnes: My favorite SF author may well be Harlan Ellison.  My all-time favorite work of fiction may be “Hamlet.”

M. Aurangzeb: Do you think the current political climate effected portrayal of Muslims in Science Fiction?
Steven Barnes: Sure.  SF is a pretty “conservative” field, and 9/11 scared the crap out of a lot of people–as it should have.  Amid the soul-searching and hand-wringing there was a predictable amount of Islamophobia.  I’m not sure how much made it into print, but I can promise you that there was plenty behind the scenes.

M. Aurangzeb: What advice do you have you young and burgeoning Muslim authors who may be interested in writing Science Fiction?
Steven Barnes: To understand that they are rowing upstream.  Be strong.  Figure that they will have to do twice as much to get half as far, and deal with it.  But there may be an advantage: their cultural mythologies have not been overused, and may therefore have an exotic attraction.  And to remember that most SF fans try to be open minded.  Extend humanity to your Christian characters, and you’ll probably find welcoming readers.