iOrientalism: Fooling around with Arab princesses 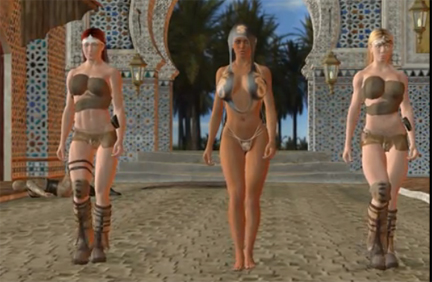 The late Edward Said lamented the biased representation of the “Oriental” in his influential Orientalism, published 35 years ago. Most of the scholarly and voyeuristic tomes he critiqued are rarely read these days, although his intellectual nemesis Bernard Lewis is well represented in your local Barnes and Noble bookstore (in part thanks to a desire for selling books rather than seriously vetting them by some of the editors at Oxford University Press). Few students of the Middle East or Islamic studies these days have ever heard of Lord Cromer or William Muir or Raphael Patai, let alone would read and be influenced by their aged volumes. The ugly ethnocentrism, racism and sexism that once could be found in the broad (far too broad) discourse labeled “Orientalism” is still quite evident, although moreso in the media, political punditry on the right and rantings of career Islamophobes than by serious scholars. But we are now in the digital age and iOrientalism is now propelled through Facebook, Twitter and Youtube via iphones, ipods and their technological clones.

One Youtube video that recently appeared on a Youtube search that had nothing to do with the subject I was searching is a mock video-game fight between three hefty-bosomed and bursting-at-the-bra-straps Arab princesses and a swarthy Mike Tysonish evil guy. This appears to be a promo for Poser Pro Animation rather than a cultural statement per se. The three

Arab princesses are so scantily clad that it is more the tile-glazed architecture and palm trees that orientalize than the costume or look. Of the three kung-fu trained ladies, one has red hair, one is a blond and the other is wearing what looks to me like the kind of aviator helmet worn by Amelia Earhart in the 1930s. The bully wears a leather waist band, but otherwise the shaft he was endowed with by nature is visible to the three princesses, but not to those of us viewing the video. Ironically, this parallels Said’s choice of the Gérôme’s painting that graced the cover of the original paperback of Orientalism: this features a naked boy with a snake wrapped around him and a group of grizzled Walnetto perverts staring at his organ, while we voyeuristic viewers can only see the glistening buttocks of the youth.

The “Arab princess” in the video is a makeout-makeover of the depiction of Yasmin in Disney’s Adaddin. Far from the damsel in distress, these three are damn dangerous out of dress. They not only can kick the ass who attacks them, they can knock him out cold. I suppose a preliminary look at the video could suggest that this is a feminist response to “Arab” patriarchy. As a demanding male, you should think twice before fooling around (or trying to fool around) with these three beauties. Any one of them could take you on and win. That is one message of the video. Of course, the fact that the three warrior princesses are almost naked, except for the military boots on two of them, makes this kind of “feminism” the wet dream variety of male porn addicts. As the video does not actually have a wardrobe malfunction, letting a nipple slip into view, it is pc in a formal sense.

But let us not fool ourselves. This thoroughly sexist rendering of a so-called “Arab princess” is about the erotic manipulation of all female bodies. It is perhaps easier to accomplish this when there is also the background bias that these “Arab” women are usually veiled and compliant to male orders. But liberating women from veils, as odious as the notion of forcing a woman to cover up due to male inability to respect the natural beauty of the human body, in this video only frees them to be objects for male fantasy. These three princesses might as well be robots (in part due to the digital limitations) who walk in, throw punches, kick fight, and keep on walking. They are not distinguished by personalities, and all have the same thin body shape that the creators assume the viewers want to see, but by hair color. This is the iOrientalism offered as play, but it hits a deeper gender nerve. If the only thing that matters is the female body offered up to view for male fantasy, then these “Arabs” are us.