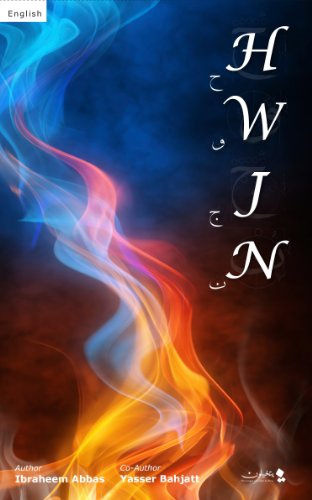 Writing about HWJN has been on my list of to-do things for a while but it is only now that I am able to post anything about it. HWJN is the brainchild of Ibraheem Abbas and Yasser Bahjatt who published the novel via their own publishing company Yatakhalayoon in 2013. They are also founders of The League of Arabic SciFier. The story involves a chaste romance between a human and a supernatural being (Jinn). While the presence of the Jinn may indicate elements of fantasy, the novel does try to give naturalistic explanations for the existence of Jinns. The Jinns have their own civilization and culture which similar yet different from humans. In the novel the Jinns live in a parallel dimension. Hawjan is the eponymous Jinn who falls in love with a human girl who lives in the same house as him but in a parallel dimension. The novel has been very successful in Saudi Arabia as well as outside of the country. It also got the wrong type of attention from the ministry of prevention of vice in Saudi Arabia which led to it being banned. The novel has been described by the author Gregory Benford as cultural communication done well.

2016-12-16
Previous Post: Rebecca Hankins at the National Historical Publications and Records Commission
Next Post: Peace Through Art. Pipe Dream or the Way Forward?