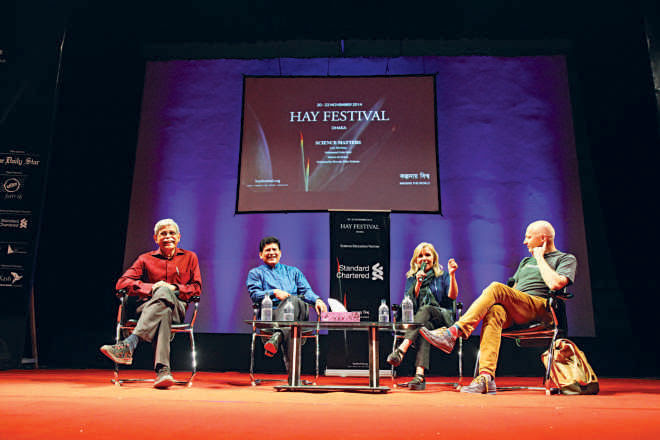 This is a couple of years old but I have gotten it as a reference from multiple people so I thought I should post it for reference. Thanks to Hal H. and Ellen K. for the pointer. While it doesnt go into much detail, it does give one some hints of whats going on in Bangladesh in terms of Speculative Fiction, and curiosity is everywhere. Source: Daily Star

The most stereotypical image of a scientist in films is of a person with a big head doing bizarre experiments in his mysterious, underground laboratory. However, it is the very mystery associated with science that fascinates the young mind. When the three celebrated figures of science and science fiction Muhammed Zafar Iqbal, Lucy Hawking and Marcus du Sautoy came to the dais there was hardly any vacant seat in the huge auditorium of Bangla Academy. For an hour, the Hay Festival premises turned into a festival of science enthusiastic youngsters.

Hossain Zillur Rahman, moderator of the programme gave an apt introduction: “Science education in our school is a matter of great concern. But the overwhelming presence in the ‘Science Matters’ session should be an example of our youth’s interest in science.” Then it was the celebrated panellists who started to decode how they engage the young children’s mind to catch the difficult scientific realities such as Big Bang, the beginning of time etc. Lucy Hawking, the author of highly popular George’s Secret Key to the Universe series says, “When I write sci-fi for children, I try to make it entertaining and accessible. But without breaking any rules of physics which my father (Stephen Hawking) ensures when I work with him on my books!”

But this impressive group of panellists faced the real challenge during the question answer session. Besides a lot of lively queries there were tricky questions such as “Are religion and science related”. Some students asks what happened during the Big Bang and one of them says, “Isn’t it only faith which explains what exists before the Big Bang?”

The question-answer session turned into a lively debate. But before the young scientists in the audience came to a conclusion about the beginning of time, the time limit of the session came to an end. However inquisitive minds are seldom satisfied. As Marcus du Sautoy says, “Inquisitive mind and imagination are the most important to learn science. We will discover our future Einstein and Ramanujan among these inquisitive young minds.”