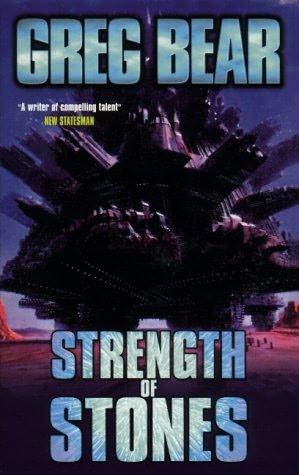 Strength of Stones by Greg Bear in a novel with an interesting premise. After a series of conflicts on Earth in the 22nd century a group of Jews, Christians and Muslims settle on a planet named God-Does-Battle. They live in massive computerized cities which are programmed and governed by strict religious rules. The society on the planet is meant to be a utopia but also where the computers make sure that the people are righteous. One of the consequence of this is that the cities end up evicting humans who do not measure up to the religious rules. Given the climate of the planet, humans who live outside the cities have a primitive level of technology.As more and more people are evicted the cities themselves begin to decline as they are no longer meeting their purpose of serving humans. A coupling of these factors drives the plot of the novel.
Thanks to Hal Hall for the pointer.