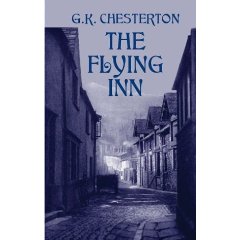 G. K. Chesterton’s 1914 novel, “The Flying Inn” is set in a near-future (for 1914) United Kingdom which has been taken over by Muslims. The Muslims have imposed Shariah and banned alcohol, and the two main characters (who are English) have taken it upon themselves to smuggle alcohol all over England to the desperate English in an act of defiance against the authorities. They are constantly on the move to keep one step ahead of the religious police, hence the book’s title. Chesterton clearly did not bother to learn much about Islam, as his understanding of Shariah doesn’t seem to go beyond the fact that Muslims do not drink and can marry four wives.
[Thanks to John M. for the synopsis]