Edward Gibbon’s The Decline and Fall of the Roman Empire 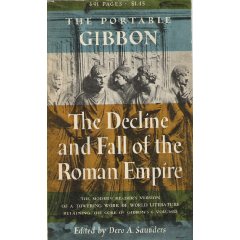 Edward Gibbon, the author of The Decline and Fall of the Roman Empire wrote a famous passage on the Battle of Tours (732), what if the Muslims had won in that battle, which is sort of an alternative history.

A victorious line of march had been prolonged above a thousand miles from the rock of Gibraltar to the banks of the Loire; the repetition of an equal space would have carried the Saracens to the confines of Poland and the Highlands of Scotland; the Rhine is not more impassable than the Nile or Euphrates, and the Arabian fleet might have sailed without a naval combat into the mouth of the Thames. Perhaps the interpretation of the Koran would now be taught in the schools of Oxford, and her pulpits might demonstrate to a circumcised people the sanctity and truth of the revelation of Muhammed.