Donald Moffitt’s A Gathering of Stars 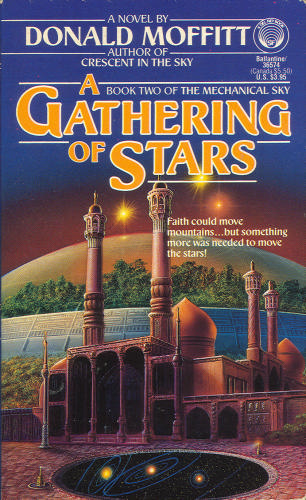 Here is a synopsis from Fictionwise.

The ambitious Sultan of Alpha Centauri can only claim the illustrious title of Caliph if he makes a ritual pilgrimage to the holy city of Mecca. This journey completed, he will rule the entire population of the greater Islamic universe. But human knowledge has not yet been able to overcome the significant challenges presented by interplanetary travel. However, the Sultan resourcefully enlists the help of Abdul Hamid-Jones, a clever fugitive with a price on his head and the law on his heels. Thrown into the bewildering world of the Sultan’s schemes, Abdul receives a hasty introduction to complex physics and the even more complex political intrigues of the Sultan’s court. Responsible for the successful execution of the Sultan’s plan, Abdul slowly realizes with horror that the fate of the entire Solar system could be resting on his shoulders.
(Source: Fictionwise)