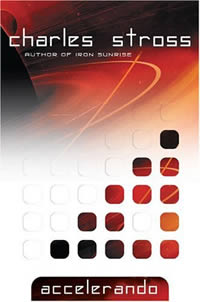 The story is set in a post singularity future. Sadeq is a Muslim character and is a prominent secondary character, an imam on a small ship in orbit around Jupiter and asked to adjudicate a very complicated dispute according to Islamic law and is later tempted in a virtual reality universe with a false version of paradise to test his reactions and faith. An engineer, a scholar and a judge, and certainly one of the more thoughtful characters portrayed

[Thanks to John W. for synopsis. Also thanks to Michael H, Alexander C and Angela G]