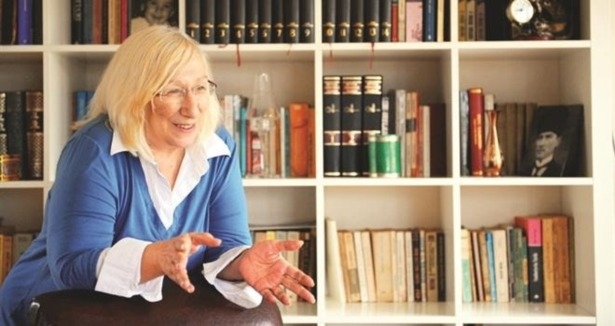 Alev Alatlı is a Turkish author who has written both fiction and non-fiction including a few Science Fiction Novels. Her duology Schrodinger’s Cat consists of the two novels “Kabus” (The Nightmare) and “Rüya” (The Dream). The Turkish video game Culpa Innata is based on her sci-fi novel series Schrodinger’s Cat. 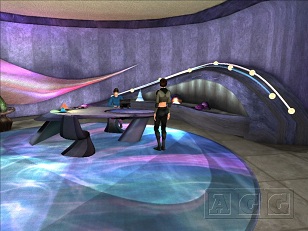 A screenshot from the Turkish sci-fi adventure game Culpa Innata which is based on one of Alev Alatli’s novels (Image Source: Adventure Classic Gaming)

Here is a review of Schrodinger’s Cat by Tayfun U.

…  the author has immense knowledge in many different fields and combines them (without discrimination) to portray her message. She uses the arguments of multiple views in a story format and lays them in front of the reader to display what they are. Her view of post-modernism is a one of (and & and) rather than either or. Schrodinger’s cat can be dead and alive at the same time. In Aristote’s way of thinking the world is binary, black and white there is no gray. She mentions Lutfizadeh, the discoverer of Fuzzy Logic, which says things are at a relative level so things are fuzzy. (In programming, there is no else statement in fuzzy logic, just ifs) Of course Lutfi Zade’s discovery dates back to Buddha and Nasreddin Hoca who saw the world as it is (Gray). Another interesting point is the poem about nail of a horse shoe.

Nail is very important and we should be aware of it. Devrim’s situation (at the end she committed suicide) could have been prevented if there was attention paid to Nail. The novel takes place in the early 2000s in an era where the world has changed dramatically and new world order has been founded. Of course these things happen in mosques, which is quite thought provoking. In this order:-  here is Yuce Pir (an entity that is practically being worshipped)- There is an economic way (Ayn Rand’s Capitalism)- There is Absolute Cognition- There is Path- There is Esmaul Husna (beautiful names of Yuce Pir). The new world order is based upon logic (people’s logic level are tested and people are placed in different classes, Yuce Pir scores 100 out of 100). Although it is based in logic, it uses the forms of organized religions. So this is a new religion based in Logic (logic of Aristote) and people are certain of what they know. This new postmodernism definitely pulls the person out of us (there is I in us). Furthermore, a person sees his or her qualities in others thus merging with others. Some Highlights of the novel (one can explain only as much as the other person understands, so this is my understanding) Life is and & and (Buddha) which encompasses either or (Aristote) If I were to gather all of the information about Islam, I still could not tell if the person in front of me is Muslim or not. Physical rules are only true up to a point. Mathematical rules are not certain as they reflect reality. When they are certain, they do not reflect reality anymore.Islamic rules are not certain as they reflect reality. When they are certain, they do not reflect reality anymore.